On Monday (July 21), the Nelsonville Village Board met to discuss issues pertaining to roadwork and general maintenance within the village.

The meeting began with Village Clerk Pauline Minners’ presentation of a packet, which arrived in the mail from the University of California at Davis, regarding shale gas drilling. The packet was set aside and the topic did not receive further attention throughout the meeting, however.

It was also announced that the Putnam County Department of Health’s Eat Smart Restaurant Week will be held from Sept. 7 through Sept. 21. Over 40 local food establishments have signed up to offer two to three healthy menu entrees that “make the best of fresh ingredients in appropriate portion sizes,” according to Putnam County Online.

A few projects on Healy Road were finally completed. These included redoing the drainage and piping for 1,500 feet, as well as resurfacing the road and planting grass where needed. Mayor Tom Corless described it as “a quarter million dollar project that no one knew about.” Trustee William Duncan mentioned that most of the project was paid for by taxpayers. 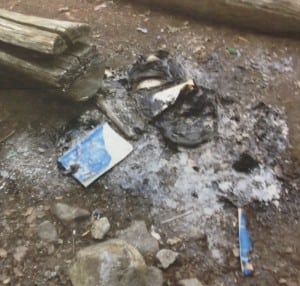 Next, it was announced that the village received a concerned email from Nelsonville resident Dave Limburg regarding the burning of schoolbooks along the trail in the woods between Secor Street and Haldane. Limburg’s email included photos of burned books, garbage, and a street sign found in the woods. He voiced his frustration in cleaning up the mess alone.

“It’s time for some official action,” he said. The email included that many hikers visit Cold Spring and Nelsonville, and he did not want this to be the impression people get of the local trails. Mayor Corless was not as concerned as Limburg about the issue, mentioning that the woods were much worse years ago when he was growing up. “The email makes it sound like a local dump back there,” he commented. Corless then said that he resolved the issue with the student burning books. “I identified whose book it was and talked to the parents (of the student), and it was cleaned up.”

The Pearl Street Sewer, which is a private line, has been giving some residents a bit of grief. It was recently clogged and resulted in a $6,000 bill to be divided among the houses affected. Everyone receives a copy of the bill in the mail and some don’t pay, but it gets included in their taxes. The sewer has been known to have issues in the past, and Corless and Duncan would like a long-term solution. “We’re just fixing the immediate issue,” Duncan said. “Every time we call Fred Cook [vacuum-excavation operators] we never know if he’s going to fix it,” Corless said.

Clerk Minners said that $15,000 was slated for street maintenance so far, leaving the village in need of $5,425. Upon hearing this, Trustee Duncan made a motion to take $6,000 from Contingency and move it to Street Maintenance, which passed.

On the subject of property taxes, Clerk Minners said that Nelsonville has received $221,279 of an expected $263,373 to be collected.