The Cold Spring Lions Club honored one of their own last weekend. At a brief ceremony on Sunday afternoon, July 27, the social service organization unveiled a new bench on the Cold Spring Dock and dedicated it to past organization president Betty Budney and her husband Mackey, who died in June 2013. 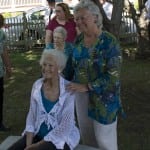 “It is always a great day when you can celebrate happiness, love and family,” said current Lions president Pam McCluskey as she opened the event. “We are here to honor Betty and Mackey’s service to Cold Spring. Betty was one of the first female Lions in Cold Spring,” she continued.

McCluskey also recalled Mackey Budney’s decades of service to the Cold Spring Volunteer Fire Company. He served as a chief and a member of the board of governors. An honor guard from the company turned out for the event underscoring appreciation for Budney’s dedication.

Betty Budney, surrounded by her three daughters, Mary Jo Knapp, Cathy Greenough and Denise Brewer, thanked the Lions and Anthoine for the honor. Seated on the white bench, Budney said “putting this here, you couldn’t have picked a better spot. She recalled that her husband had “lived on the river. It was where he grew up; it was his playground before he met me. He ice-skated, swam, did all kinds of things.”

Aside from her Lions service in all sorts of community initiatives, Budney was also a long-serving member of the Philipstown Town Board and a stalwart of the local Democratic Party organization. Assemblywoman Sandy Galef paid tribute to that history with her presence. Current Philipstown Democrats Treasurer and candidate for County Clerk Lithgow Osborne was also present. He told Philipstown.info that Budney’s way of putting public service at the forefront of political involvement was an inspiring example for him and others. 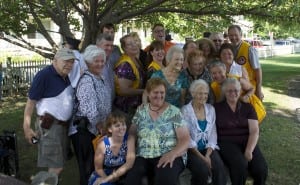