A quick scan of the cuisines of the warmer climates offers the lazy chef a variety of alternatives to the usual year-round fare and this week I’ve settled on tabbouleh, basically a salad of chopped greens, tomatoes, bulgur, mint and onion dressed in garlic, lemon juice and olive oil and common to pretty much every culture of the Arab world, as a jumping-off point to high summer “cooking.” 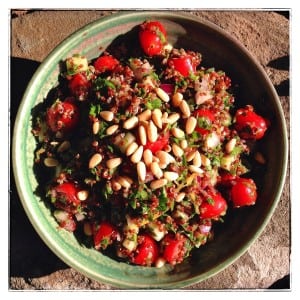 A deconstruction: first, the greens. Parsley is by far the most common and primary ingredient identified with nearly all Middle Eastern recipes. Somewhere between a garnish, an herb and a leafy vegetable it rarely gets a starring role, and while its recent inclusion near the top of the CDC’s list of high-nutrient-density “Powerhouse Fruits and Vegetables” (for the complete list, visit cdc.gov) justifies it, I thought the inclusion of another abundant green would offset its (to my palate) grassy taste. I first considered spinach, which seemed “OK” if a bit expected, but consulting the list again went straight for the toppermost-of-the-poppermost of vegetable powerhouses, watercress.

Peppery and assertive, and a member of the Brassica family (which brought you, yes, kale) it is ranked by the CDC as the MOST nutrient-rich vegetable of them all (with a staggering 100 percent nutrient density by weight, the only vegetable or fruit to achieve such a score) in addition to offering a culinary “bite” which would be offset nicely by the lemon, garlic and mint. I sourced some beautiful organic hydroponically grown cress at Beacon Natural Market.

About the tomatoes: Summer is tomato season, and while “the big boys”—the heirlooms and beefsteaks — should be just starting to appear, cherry tomatoes (actually a cultivated berry) are sweet, ripe and plentiful.

Bulgur wheat is also a traditional addition or ingredient which most of us have come to accept as part of the package, even though the classic recipes particularly lean heavier on the greenery. But bulgur, while more nutritious than processed wheat and offering a substantial “tooth” and nuttiness, presents some of the same dietary problems as common wheat.

Searching for an acceptable substitute (and the only ingredient that requires cooking) I settled on another purported “superfood” — quinoa — an edible seed, and unlike most “grasses” or grains like wheat, a source of complete nutritional protein. Originally domesticated in the Andean region of South America (like the cherry tomato!) it tilts this tabbouleh to a more truly global aspect that somehow seems made for the New World.

That pretty much covers the basics. The finer points include a healthy dose of cooling mint which is, again, plentiful this time of year and I suggest that if you have a handful of basil and/or cilantro or any other leafy herb, by all means pile them on. (Note: the quantities specified are minimums; I will almost double up on ALL the green stuff). Diced red onions are de rigueur. I’ve added a bit of cumin to the reasonably straightforward lemon vinaigrette, which works with either a Middle Eastern OR South American seasoning attitude. Diced cucumber is optional, but toasted pine nuts (or toasted and chopped walnuts or almonds) add an almost necessary crunch.

I suggest chopping the greens and herbs by hand. I use a mezzaluna which gives an infinitely better texture than machine-processed vegetables and is a helluva lot easier to clean.

Tabbouleh is a great side with any of your favorite grilled summer fare but in itself a nutritious main course, particularly when fortified with additional greens or augmented by cooked beans, avocado, diced chicken, shrimp or even tuna.

I prefer to refrigerate the salad, which gives the flavors a chance to meld. Serve at room temperature or slightly cool to offer a bit of needed relief from summer heat. After all, who wants to slave over a hot stove?

Serves six to eight as a large side dish.

Juice (3 tablespoons) and zest of one large lemon

Salt and pepper to taste

1. Cook the quinoa: In a fine mesh strainer, rinse quinoa in cold water for about two minutes. Bring salted water to boil in a 1½-quart lidded saucepan. Add quinoa and simmer for 15 minutes. Remove from heat, fluff quinoa and let sit covered off heat for 10 minutes. Dump contents of pan onto a clean cookie sheet and let cool.

2. Prepare the vinaigrette: Whisk and macerate all ingredients except olive oil for 15 minutes. Whisk in olive oil as needed to achieve proper consistency.