Since its founding in 1961, a time when idealism was not looked upon with cynicism, the Peace Corps, the United States government agency which operates independently of foreign policy and whose mission is to promote world peace and friendship, has sent 215,000 Americans to countries around the world. Established by President Kennedy, since its inception, volunteers have served in over 130 countries, currently serving in around 65.

The countries, which have to “invite” the Peace Corps in, come and go, depending on their needs and an ability to provide a safe infrastructure for volunteers — just last week volunteers were withdrawn from Kenya for safety reasons and earlier what had been a large program in the Ukraine was suspended. 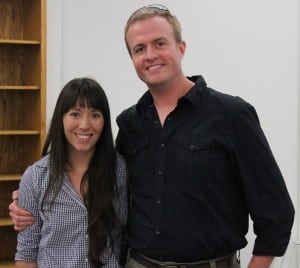 Returned Peace Corps volunteers Jessica Gilbert and Chris Bowser contributed their reminiscences to the discussion. (Photo by A. Rooney)

So explained the Peace Corps’ Douglas Miller, who came to Desmond-Fish Library on June 24 to speak about the program, joined by two returned volunteers from the Hudson Valley.

Recently the Peace Corps application process was overhauled in an effort to expand the ranks. Vastly streamlined, it has been designed to make applicants feel more in control of the process, including expressing preferences for country placement and type of work. What hasn’t changed is the length of service — volunteers devote three months to in-country training (every country has a local office staffed by a combination of American citizens and host nationals), followed by 24 months of service.

The tenure of each volunteer is designed with an end goal in sight and the expectation that by that time the skills will have been transmitted to members of the local populations, to be carried on independently. The training, contextualized to the country, consists of language (some countries, notably in Latin America, have language pre-requisites), technical, cross-cultural, and health and well-being.

Jessica Gilbert of Wappingers Falls returned last fall from four years in Peru; the first two as a regular volunteer, the last two as a field leader. A biologist, Gilbert came to the Corps as many do: “I wanted to do something to try to help people. I had an optimistic, idealist perspective,” she said, “and it was fulfilled. I was placed working in a national park where I was able to use my skill set — it was refreshing.”

Returned volunteer Chris Bowser, on the other hand, was initially less starry eyed: “I was walking down the hall and saw a poster, and it got me thinking ‘my life’s too comfortable — what can I do to change that?’ I knew if I didn’t do it then, I might never. The idealism didn’t kick in until I was there. I went for selfish reasons; then came idealism.”

Sent to the Saharan nation of Mauritania, Bowser planted trees. Villagers came to him saying, “The sand dunes are swallowing our village. Can you help us?” He did, training them as they planted together.

“We planted 2,500 trees in a little village,” Bowser recalls. Returning three years later to visit, “I looked out from a ramshackle taxi and saw all these trees. I was told ‘these are your trees.’ Every year after I left, the villagers planted another thousand trees. Without a volunteer, this would never have happened.”

For Gilbert, the biggest sense of accomplishment came from seeing more sustainable behavior changes, both micro and macro, from the children in the family she lived with to the many park rangers she worked with, “mainly older men who never finished secondary school. I trained about 25 of them to do many biological things, monitoring the state of the forest. Being there for four years I could see a deforested hillside become forested again.”

Each experience is unpredictable. Bowser was most surprised “by how important religion became in my life. Not in a ‘finding God’ way, but because I was forced to talk about religion every single day there … Religion garnered respect; as long as I could talk a little bit, I got acceptance.” Gilbert described herself as “surprised how fast I felt comfortable there, in this Quechua village of 250 people in the middle of the Andes — I felt at home.”

For Bowser the challenge was also the charm: “Americans are cultural workaholics. In Mauritania it was a different pace, a different way of getting things done. The first year I was full of self-doubt — I felt I wasn’t getting enough done. Then things clicked into place — it was almost magical. The first year turned out to be a set-up for the second.” 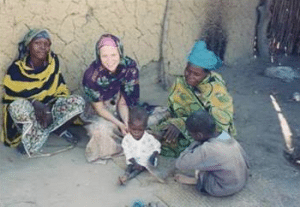 Carolyn Llewellyn, during her time in Niger.

At least two Philipstown residents have served in the Peace Corps: Carolyn Llewellyn in Niger, from 1996 to ‘99, doing agricultural and health work, as well as sustainable construction, and Danielle Pack McCarthy from 1998 to 2000 in St. Vincent and the Grenadines, working in education, as a school counselor. Pack McCarthy recalled:

I worked to help children on a very small island learn to trust me enough with their problems and share their dreams. One of the highlights of my experience was a retreat I organized for girls of sexual abuse. These girls had never told anyone else what had happened to them. By the end of the day, they had a roomful of girls who had listened to their story and were now supporting them and cheering them on. Living on my own for two years taught me so much about myself — and the people of St. Vincent showed me every day how much I had to be grateful for. Today, I still work with the children at that school, through an organization called Denniston International, which works to help these children focus on learning and not just surviving.

Unlike other volunteer opportunities, most Peace Corps assignments allow the volunteer to be the only American in a foreign community. This encourages integration and full participation. The 24-month length of service gives time for a deep understanding of one’s work in its context.

Like many volunteers, I joined the Peace Corps with very idealistic goals and expectations. Like most volunteers, I was humbled. Lo and behold, I could not save the world. I was able to participate in very meaningful work and enjoy wonderful relationships. My own philosophies and ideas were challenged by the deep complexities of poverty, inequities, politics, and cultural attitudes. This continues to be the case 18 years later.

My experience was very cliché Peace Corps: I helped folks in the village where I lived construct my mud hut and dig a latrine for my use. What I thought were simple problems, like children not being sent to school and sick children not being brought to the clinic, turned out to be complicated. The simple composting techniques and basic health measures that I was able to share did improve life for some families. And I am thrilled to be able to report that guinea worm, which was a major problem in the area at that time, has now been eradicated in Niger. The work of Peace Corps volunteers contributed to that change.

Overall, though, the experience, for me, turned out to be much more about relationships than about any specific “work” that was or was not achieved. What I learned, and continue to learn as I remember my friends there every day, is beyond measure.

Unexpectedly, returning home was much more difficult for me than acclimating to a pre-industrial village in West Africa. The food that was disposed of after just one meal in America contained more protein than my adopted family in Niger was able to eat in a month.”

Gilbert concurred, saying, “Coming back home was difficult at first. Your perspective changes on a lot of things, your convictions on some things.” Miller called the reverse culture shock “common, and a testament to how deep and profound the Peace Corps experience is.” 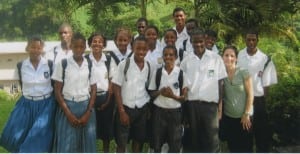 Danielle Pack McCarthy, with the students she worked with during her time in St. Vincent and the Grenadines.