A 50-foot sugar maple in my front yard is marked for destruction. Sometime in the very near future, this shade-giving, syrup-producing shelter for birds that holds in hundreds of pounds of carbon will be reduced to firewood in a matter of hours after taking decades to grow to this size. Roots that hold in soil and prevent erosion, leaves that decompose to become a rich layer of mulch, and flowers that nourish bees in spring will all be lost. 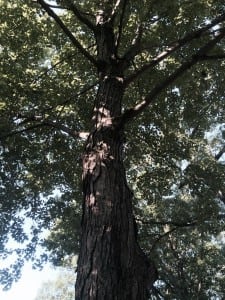 Deciding to remove a healthy tree is never an easy decision. (Photo by Mary Ann Ebner)

In my defense, this tree is about 30 feet from the house and it leans at a 30-degree angle toward the house. Although the side of the tree facing the house has full branches, Central Hudson’s crews have stripped the roadside branches over the years, leaving it unbalanced. While it doesn’t fit the profile of a high-risk threat, it makes me uncomfortable given the intensity of Tropical Storm Irene and Superstorm Sandy in recent years. I’ve watched that tree’s branches toss around in high winds ferociously. There are at least a dozen other trees in striking distance of the house, but it’s both the proximity and the angle of the lean that I don’t like about this one.

There’s an advantage to losing this tree, too. When it’s gone, our house, patio and front yard will be opened up to dramatically more sunlight. Four years ago, the patio plants used to get full sun. Now it’s reduced to maybe four to five hours per day. Forget about the grass or growing anything else in the yard. Moss is the best option at this point.

Here are some facts about sugar maples.

“A tree can absorb as much as 48 pounds of carbon dioxide per year and can sequester 1 ton of carbon dioxide by the time it reaches 40 years old,” according to the North Carolina State University Cooperative Extension’s fact sheet. My tree is at least 40 years old and when it is cut down, all that carbon is released.

According to the Hudson River Audubon Society of Westchester’s website, maple trees support grouse, turkey, purple finch, goldfinch, grosbeak, and the red-breasted nuthatch. The birds feed on their seeds.

The United States Department of Agriculture Plant Guide lists white-tailed deer, moose, and the snowshoe hare as browsers of the sugar maple. Squirrels eat its seeds, buds, twigs and leaves. Birds nest in its cavities and bees use its flowers as an early spring source of food.

Last but not least, the sugar maple is the state tree of New York.

There is a plan for new trees once this one is gone. I’ve planted shadblow and redbud already in the yard. Both are native understory trees that sustain birds and bees, too. To keep sun on the house, a line of lower-growing trees will replace the maple. Witch hazel is a native tree with fragrant blooms and provides great sustenance for bees. It’s hardy and low maintenance, growing to a height of 15 to 30 feet tall at maturity. I have four seedlings I put in last year that will be ready to transplant.

I’ve also got a plan for a flowering dogwood or Cornus florida. This native tree has showy white flowers that sustain bees, birds and squirrels. Nothing beats a lovely tree that also contributes to wildlife habitat. The Kousa dogwood or Cornus kousa isn’t a native, but it’s been naturalized for more than a century and has more resistance to dogwood anthracnose, a fungus that can kill the tree eventually if not caught early and treated.

Fruit trees are another option, although they would be more maintenance and care to capture a harvest. If left to their own devices, though, fruit trees can sustain a variety of wildlife, as well.

Deciding to remove a healthy tree is never an easy decision. No matter what factors influence the choice, considering replacements that add value to the landscape as well as beauty and enjoyment can make up for the loss just a little bit. There isn’t anything that will replace all that carbon that’s released, though. Loss of forests across the world is a key contributor to global warming trends. While that may not override the need to take down a tree in someone’s yard, it’s certainly something to consider when it’s done on a mass scale for development.