There was no master plan.

Phil Tarant, a resident of Beacon for 60-plus years, had retired from his last job. An accountant, he helped retirees transition into new careers and the lively septuagenarian was in the mood for a career transition himself. “I figured: 70 is the new 50.”

Being a diehard music-lover and engaged Beaconite, Tarant was aware of the changes to the cultural and social tenor of the town with venues such as Dogwood, The Towne Crier and Quinn’s revitalizing Main Street and beyond. 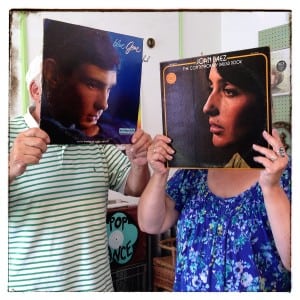 Sandy Rokoff and Phil Tarant are the people behind a new record shop in Beacon.

He was also a hardcore, life-long record collector. Starting in high school, his first love was doo-wop, which he considers to be the source, where it all comes from. (Although as you will see, his taste is eclectic and universal—his partner Sandy Rokoff lovingly calls him “Beacon’s oldest hipster.”)

He had been dealing in occasional eBay sales of some of the more select 7-inch 45s, and it was a natural move to consider using the rest of his extensive collection of singles and LPs (for the younger readers, that’s short for “long players,” i.e. 12-inch, 33-1/3 RPM vinyl records) as the start-up inventory for a small retail shop to test the entrepreneurial waters.

A routine real estate prowl through the neighborhood uncovered a small, barely-200-square-foot windowed storefront space nestled between Beacon Barkery, a dog bakery, and Paws & Mittens, a grooming parlor. It was available, affordable and manageable, and on May Day 2014 Beacon’s only vinyl-centric music store—the Sound Shack—opened for business, sharing a space at 190 Main St. with their landlord, Gwen’s Sign of the Time Unisex Salon (a haircutter who operates out of a curtained space in the rear of the store). Rokoff, a jewelry designer, based the retro, flower-shaped logo and handmade interior signage on a Four Tops album cover.

The response from the community was immediately warm and welcoming. Offering a cherry-picked selection from Tarant’s collection, the stock was scrupulously cleaned, sleeved and priced, “curated” and organized according to genre, rock being the primary focus, but including a healthy and surprising selection of soul, jazz, blues, gospel, folk and even classical and modern classical and a category known simply as “Odd Balls.”

Initial sales to locals and day-tripping travelers and collectors led to offers to buy other collections, bolstering and replacing the original stock. Requests for vintage stereo equipment led to a tweak of the store’s original concept and since opening it’s gone on to offer a regularly cycling selection of reconditioned amplifiers, turntables, speakers and new items like Crosley portable turntables (which will also digitize your vinyl), a move that has proven to be a major boon to the business.

There are also select vintage and contemporary posters and memorabilia and some music-related books. In addition, the Sound Shack has hosted exhibits of work by visual artists working with music-focused themes and imagery.

On a recent Saturday afternoon I visited the shop and was welcomed just inside the door by the display of a vintage favorite—Moby Grape’s eponymous first album from 1967, considered by many (myself amongst them) a masterpiece of San Francisco rock’s summer-of-love and a musical harbinger of psychedelia and genres-yet-to-come, such as country-rock and Americana, but equally notorious for its original cover photo which featured drummer Don Stevenson discretely but none-too-subtly extending a middle finger in a gestural display considered by many to be rude at the least, if not downright obscene. 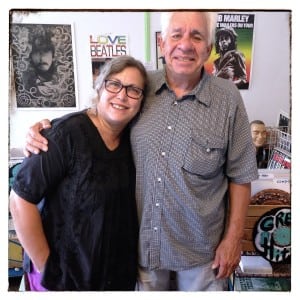 The digit was initially pasted over with a sticker (the copy I had), and subsequently supplanted by a retouched, airbrushed “correction.” Here at the Sound Shack, said digit was still proudly on display, all these decades since. It warmed my heart.

The atmosphere runs to handmade-funky in opposition to post-ironic-hipster-homage of modern shop design. The Allman Brothers “Live at The Fillmore” was playing on the vintage turntable as a young man (late 20s, early 30s?) negotiated the purchase of a cherry pair of used Bose speakers. A young couple and a lone male scoured the album boxes while Tarant and Rokoff enthusiastically hovered about answering questions for any and all.

I spotted a “$3 Specials” box of LPs and more encouragingly a healthy box of NEW vinyl releases and re-issues: Beck’s lovely “Morning Phase,” Morrissey’s brand-spanking-new and presciently named “World Peace Is None of Your Business, ”Jack White’s obsessively peculiar “Lazaretto,” the recent spate of Led Zeppelin reissues (albums I, II and III). Tarant cited recent New York Times business articles detailing retail trends that have vinyl sales surpassing those of CDs in certain markets for the last couple of years.

“Vinyl is final,” he quipped. Consequently they engaged a couple of younger on-the-ground local “advisors” to keep the newer offerings up-to-date.

(I should also mention that there are a few boxes of used CDs for sale but they have been relegated to the sidewalk and curbside display on Main Street so as not to pollute the atmosphere inside. There was also some talk about the imminent arrival of cassette tapes, but that was agreed on as a truly niche market—I was offered a triple-tape Jim Nabors collection for free).

I asked if business had been as good as they hoped and they assured me it had. There seems to be a healthy local, transient and (did I say?) young market for their wares, top sellers being the British Invasion bands (The Kinks and the like). Tarant, a genial musical elder, proudly produced a pristine copy of The Hollies first disc and knowledge of and affection for the music radiated from him.

Rokoff chimed in about how so much of the operation is about a personal sense of connection and that these things “need to be touched.” The aesthetic and experience is totally in keeping with the pervasive and non-discriminatory warmth of new businesses in the neighborhood.

Asked about their regular clientele, Tarant and Rokoff agreed it was generally younger and said that they had noticed a lot of couples shopping together, citing a recent pair’s “first date” at the shop. Almost on cue, a hetero couple—obvious travelers—entered. The man asked if there was any John Cage (!) in stock and without missing a beat Tarant replied in the negative but proffered a Philip Glass disc as substitute.

Mildly interested in the Glass platter, the visitor inquired about Nina Simone records and Tarant went straight to a very clean copy of the live album “Black Gold,” which immediately hooked the guy, based primarily on her medley “Ain’t Got No/I Got Life” (from “Hair!”) and an exquisite reading of Sandy Denny’s “Who Knows Where the Time Goes.” (The offer to listen to things is also freely proffered to serious customers.) The gentleman walked away with the Simone, the Glass—and a memorable story.

Concurrently, an even younger young guy came in to claim a spotless pressing of Bob Dylan’s classic “Highway 61 Revisited” that he’d put on hold when he was in earlier with his parents. Again, Tarant offhandedly engaged him in a lively conversation about its merits. (As a courtesy, Sound Shack also maintains a card file system to notify regular customers if a particular sought-for album has shown up.)

Such symbiotic relationships abound: the proprietor of the Main Squeeze Juice Bar toward the other end of town is a regular customer. Over at his shop, he plays his bounty and charges juke box prices for requests, which in turn allows him to return to Sound Shack and buy more vinyl. There is a generosity and grace in evidence here that speaks volumes about the idea of community over business plans.