Lake Champlain Maritime Museum’s schooner Lois McClure will be in port in Cold Spring on Saturday, Aug. 16, and Sunday, Aug. 17, with public hours from 10 a.m. to 5 p.m. during her tour commemorating the War of 1812 Bicentennial. This year’s thematic and interpretive message is 1814: From War to Peace. 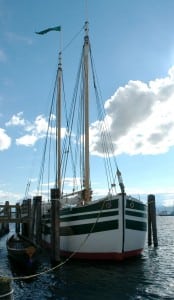 “The shipbuilding races and naval battles of 1814 helped to determine the outcome of the War of 1812, and left a legacy of shipwrecks beneath the waters of the Great Lakes, St. Lawrence River, and Lake Champlain,” explains Art Cohn, Special Project Director. “Our dynamic outreach program explores history where it happened, on the anniversary of the cross-border war that ushered in 200 years of peace. We will be sharing new information about the crucial role of the New York City shipwrights who came to Lake Champlain to build the fleet that Commodore Macdonough took into battle.”

Visitors can board the schooner free of charge to explore the 88-foot long boat “from stem to stern.” Many ports on the tour played significant roles during the War of 1812. In recent years, a tangible legacy of shipwrecks from the War of 1812 has been discovered at the bottom of the lakes and waterways where naval history was made.

These shipwrecks, and related sites on land form a powerful connection to the little-known war, which closed the final chapter in North American boundary disputes and ushered in two centuries of peaceful alliance between the United States, Britain, and Canada.