The Pueblo Indians spoke of it as “the fifth element,” and considering the global scope of its functional and geographic spread since it’s “discovery” by Columbus and his men in the fifteenth century, you would most likely agree they might just have been on to something.

I ran across a quote somewhere to the effect that corn is the only vegetable we eat that is entirely made of seeds, and consequently to eat corn on the cob is to eat life itself, like caviar: with each bite we cannibalize the future. And, as we are moving into August—that ‘sweet spot’ on the vegetable calendar, what better way to celebrate the season than by consuming a metaphorical generation or two.

Along with wheat and rice, corn—one of a ‘holy trinity’ of edible grasses—is a prehistoric botanical native of Mesoamerica (Mexico), now cultivated on every continent except Antarctica. Known by the early Spanish explorers as maize (maiz, mahiz), the word corn actually comes from the German and refers to any edible grain or seed (as polenta does in Italian). 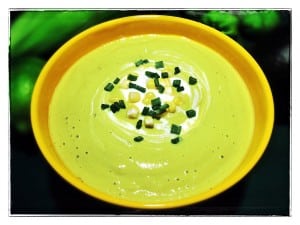 Historically, maize was originally harvested and processed as a grain to ‘put away,’ i.e., dried and ground into meal or flour for baking and cooking in the fallow seasons, but as it moved away culturally and geographically from its primitive state, as with most elements of the natural world mankind had to get into the developmental act, and the sweet (and of course supersweet, and probably by now super-supersweet) varieties that we now pine dearly for bear no culinary resemblance to their primitive ancestors.

Actually, in the genetic-scientific community corn is considered the oldest genetically engineered grass and is colorfully referred to as “a botanical monster,” as the original modifications occurred in nature, without man’s help, but curiously resulted in a common food crop that cannot even seed itself without man’s help.

Maybe this is too much information but it’s merely a drop in an overloaded bucket of factoids contained in the de facto Queen of Corn’s (I would say Corn Maiden, but she’s way more regal), food writer Betty Fussell’s 1995 meisterstück (I so desperately want to say ‘meistershuck), The Story of Corn (University of New Mexico Press; reprinted 2004). It’s an amazing and obsessive treasure trove of folklore and myth, fact, history and science, but the book of hers that you really want to try and track down is the now sadly out-of-print companion piece-recipe book, Crazy for Corn (Perennial, 1995).

As ecstatically rhapsodic about the culinary pleasures of corn as Story is scholarly (and I might and, nearly as encyclopedic), you’ve just got to love a cookbook whose first recipe is an entreaty to simply “Eat it raw.” (Ms. Fussell, then a New Yorker, actually spent some weekends at the early Union Square Greenmarket trying to dole out the raw stuff to unsuspecting shoppers—long before it was considered an acceptable alternative.)

And as far as cooking fresh corn goes, she is strictly of the less-is-more school—have your water boiling while you head out to pick the ears and only heat the ears long enough (@ 30 seconds, in unsalted water, preferably still in the husk) that they warm enough to melt the butter you generously slather them in. (There’s also an incredible recipe included for an Orange-Tarragon-Chili Butter for just that purpose! Google it.) Oh yeah!

But there actually are some amazing recipes contained therein. Today I’m suggesting a variation on one of the eye-opening favorites of mine that I have regularly prepared for years—Angel-Hair with Avocado Corn Cream (recipe included below). A luscious puree of fresh, uncooked corn kernels (the sweeter and fresher the better!), ripe avocados, tomatillos, lime and jalapeno is so simple and pure as to be classic.

But as good as it is as a warm dish (and it is), the combination has always sounded like the perfect opportunity for a cold summer soup. And so it is, too. Consequently, for this week here’s a matched set of seasonal alternatives. For the soup, I’ve suggested crème fraîcheas an optional garnish for the cold soup, but in all truth, that’s overkill — the avocados provide ample creaminess, and chives, fresh corn kernels or cilantro are more than enough embellishment. A light dusting of Parmesan cheese is all the warm pasta requires. These are both to enjoy for the ages.

2. Put all ingredients except chives in blender. Beginning with 2 cups of the stock, puree until smooth. Add more stock to thin as necessary. Adjust seasoning and chill.

3. Serve chilled. Garnished with a dollop of crème fraîche (if desired but totally unnecessary) and chives and maybe some fresh corn kernels or cilantro.

(Ingredients for Avocado Corn Cream as above, plus…)

1. Prepare as above through Step 2. Heat prepared Avocado-Corn Cream while pasta cooks.

2. Drain pasta and toss with a generous amount of the corn sauce. Serve with grated Parmesan passed separately.