Taking down a healthy tree is an agonizing decision, as I wrote in my August 1 column, but the loss of a diseased or infested tree is no less worrisome in terms of its impact on the environment and its role in the ecosystem.

After years of watching two Eastern hemlocks look worse and worse, we finally had them removed. Each mature tree was at least 50 feet tall and birds loved to nest in them. These shade-growers aren’t necessarily the most handsome trees in the landscape. Over time, older trees tend to have bare branches and lower parts can look spindly. 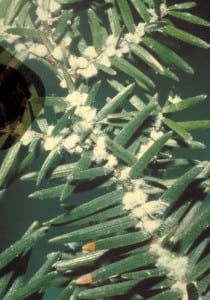 The woolly adelgid has a distinctive white coating on the branch and needles,

The hemlocks in my yard were infested with the woolly adelgid, an invasive insect in the aphid family that has threatened our native forests in New York State since it was discovered in 1987 in the Hudson Valley and Long Island. An arborist positively identified the infestation in my trees, but it’s not hard to spot from a good photograph. A white, cottony fuzz is noticeable on the needles and branches. This is the waxy coating protecting the insects that are active in winter. It looks like a thick spider web or like fake snow has been sprayed on the branch.

Infected trees lose needles and growth because the woolly adelgid drains it of nutrients and sap. The tree could die in as little as a few years. Infestations have been documented in at least 25 counties in the state, according to the Department of Environmental Conservation (DEC). The DEC has documented its spread north from the Hudson Valley and Long Island up into the Catskills and Finger Lakes region.

Birds, wind and the movement of firewood have helped distribute it. Mild winters may have assisted its northward expansion, but last season’s colder than usual temperatures probably didn’t harm the population significantly according to research published on the DEC’s website from Mark Whitmore at Cornell University,.

Eastern hemlocks have a significant role in our forests and research has shown that there are some plant and animal species that will be lost without hemlocks. Their shade creates moist environments and they tend to grow near riverbanks, cooling streams. Global warming will contribute to the loss of hemlocks as warmer temperatures lead to habitat loss and the continued northward spread of the woolly adelgid.

If you notice signs of woolly adelgid in a hemlock, the best approach is to contact the Putnam County Cornell Cooperative Extension to get advice on whether the tree can be saved and how it might be handled. Hemlocks can sometimes be treated with horticultural oils and insecticidal soaps. Systemic insecticides can be applied professionally. Anytime you’re using insecticides, though, take care to make sure their use offsets and mitigates any other environmental hazards they could cause.

Have a pool? Watch your filters for Asian long-horned beetles

In another case of an invasive pest threatening New York trees, the DEC is asking for assistance again this year from anyone who has a pool filter. The distinctive beetles tend to show up in pool filters at this time of year as the adults are emerging. Identification can help the DEC track its spread and take action if any are discovered.

The Asian long-horned beetle can be devastating to New York trees and is very difficult to eradicate. Sugar maples are a favorite of the beetle and our local landscape could be drastically altered if it took hold here. There are currently quarantine areas in Long Island, Brooklyn and Queens.

One of the best ways to prevent the spread of the Asian long-horned beetle is to buy firewood in the local area. The beetle can survive in cut wood and moving firewood from one area to the next is a major way that it gets distributed.

To participate in the study and see a photo of the beetle, visit the DEC website.