Backs pipeline moratorium and moves ahead on bridge project

On a night for eclectic topics, the Philipstown Town Board last week heard from citizens concerned about enforcement of stormwater laws and the costs of cable TV, endorsed a moratorium on a controversial natural gas pipeline, and announced an agreement on a long-debated culvert-bridge upgrade on Indian Brook, avoiding the need to declare eminent domain.

At its formal monthly meeting Thursday night (Aug. 7), the board likewise learned that interest in youth soccer through the town Recreation Department is declining while interest in exercise classes for senior citizens is on the rise.

Two months after his last impassioned comments about stormwater concerns and water pollution — and criticism of the town government for a perceived failure to do enough — Russell Cusick again raised a verbal hue and cry, declaring that New York State’s Department of Environmental Conservation (DEC) records show a mere 22 stormwater applications in Philipstown between 2003 and this month. Yet since 2009, “there’ve been dozens and dozens of single-family homes” built, “and very few of these matched the DEC permits issued,” he said. He noted that before the meeting he had dispatched 96 pages of data to town officials and spent hundreds of hours on water issues over the years. Often people “would rather I just go away. I will not go away,” he said. 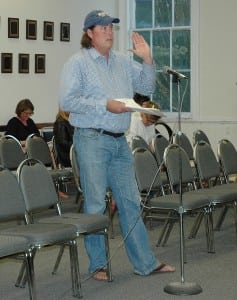 Russell Cusick addresses the Town Board. Photo by L.S. Armstrong

Cusick similarly mentioned construction — some years ago now — of an upgraded North Highlands Fire District firehouse near a turtle habitat and wetland, along Fishkill Road. “This is a site that was not compliant with our federal laws,” Cusick claimed. He said the firehouse work disturbed an area larger than an acre (thus exceeding the level of disturbance allowed without permission).

Councilor John Van Tassel, a member of the NHFD, refuted the allegation. “At no point was there more than one acre disturbed,” he said. Van Tassel added that the DEC knew of the work and “came out, and had no issues” with the firehouse.

As for the town’s oversight, Shea said, “to our knowledge we’ve met the standards under federal law. To our knowledge, we’re in compliance.” He thanked Cusick for the latest round of materials and said the board members “do look forward to interacting with you.”

Cusick in turn promised to “see you again sometime in the months ahead.”

Objecting to cable TV pricing policies, Richard Butensky, urged the Town Board to confront Cablevision, which supplies cable TV and phone and Internet services to many local homes. “I understand you probably have limited amount of power as a small town,” Butensky said. Thus he proposed that Philipstown team up with other municipalities to take on the cable company and what he described as its ever-escalating prices. High-speed Internet is crucial to many residents and in Philipstown consumers “are spending hundreds of dollars a year more than they need to for Internet” capabilities, according to Butensky. 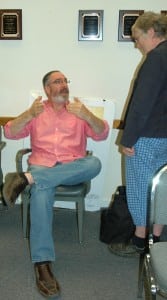 Richard Butensky talks to Mary Finger, Planning Board member, after the Aug. 7 Town Board meeting. Photo by L.S. Armstrong

“There is no competition” among cable firms for Philipstown and “that makes it difficult” to oppose Cablevision, Shea said. “The pricing does seem high to me,” while options for residents have declined. He noted that the town gets 5 percent of the fee as a franchise payment, although it’s not clear whether that covers only the TV portion or all three services — TV, phone and Internet.

“They’re not paying for our silence on this,” Shea assured him. He said that in upcoming contacts and negotiations with Cablevision, he would raise the issues Butensky cited and that the town also wants to push for more consideration of senior citizen needs, with “more affordable Internet” service.

Cablevision is currently offering its “Optimum triple play two-year price guarantee” of TV, Internet and telephone service at “$79.95 a month-first year [and] only $10 more in Year 2” per month.

On a unanimous vote, the five-person board passed a resolution supporting a moratorium on the Algonquin pipeline expansion until questions about its impact on the environment and human health can be addressed. The controversial natural gas pipeline would come near the Indian Point nuclear power plant and cross Putnam County. The county legislature has twice, in three months, passed measures expressing deep concern about the pipeline and calling for action to resolve potential problems.

The board officially ratified Shea’s action, taken a few days earlier, in signing an agreement for a temporary construction and maintenance easement on the property of Barbara and Ronald DeSilva along Indian Brook and the road bearing its name. The easement allows access for bridge reconstruction.

In late June, the board had authorized use of eminent domain proceedings to gain entry to the DeSilva land to upgrade the bridge, or culvert, which carries Indian Brook Road over the creek a short distance from Route 9, in Garrison. Nonetheless, the board left open the door to reconciliation of differences over the work. “And in the end, it was good, cooler heads prevailed. We didn’t have to go to eminent domain,” or the seizing of land for an important public purpose, Shea said. He extended appreciation to the DeSilvas, Philipstown Highway Superintendent Roger Chirico, and others who have devoted endless hours to the project so far. “We do need to move ahead and we are going to move ahead with this,” he added. “That road needs to be fixed, for all the residents on the road.”

In a written report to the board, Chirico stated that bids for the work would go out soon.

In her monthly report on Recreation Department matters, Councilor Nancy Montgomery observed that participation in children’s soccer is waning while interest in fitness classes for senior citizens grows. She suggested — and the board concurred — that the town ask Putnam County to help fund more fitness programs for the aged. “We’ve already put together a number of senior exercise programs at our own expense” but cannot increase the scope without some assistance, she explained.

Meanwhile, a fall fall-off has occurred in participation in Recreation Department soccer programs by first- to eighth-graders, she said. Although soccer drew some 300 children in the past, it now attracts about 125, she said. “They didn’t have the numbers to run the girls’ soccer this year” and are looking for ways to regroup, Montgomery added.

2 thoughts on “Town Board Hears about Stormwater, Cable TV Concerns”