If variety is the spice of life, then Poughkeepsie-based WVKR (91.3 FM) must be the fully loaded spice rack of the airwaves. Its eclectic radio broadcasts involve maximum variety and two local residents, veteran WVKR disc jockeys, are at the center of the station’s freeform mix.

Established in the early 1970s, WVKR is affiliated with Vassar College, whose students run the station and make up its board. Even before the station was established, Vassar hosted radio broadcasts as early as the 1930s.

The station is far from being only about music. The flagship of WVKR’s daytime programming is Democracy Now, whichairs weekdays from 8 until 9 each morning. Hosted by Amy Goodman and Juan Gonzalez, the multi-award winning news program is broadcast nationally on NPR, PBS, Pacifica, satellite television and numerous community and college radio stations. Its daily War and Peace Report offers a range of views on current issues using full-length interviews that feature voices seldom if ever heard in national mainstream media.

At the other end of the spectrum, listeners can tune into Radio Showtime with Bill Eberle every Sunday at 6 p.m. Eberle cues up old-time radio serials dating back to the 1930s. The Lone Ranger and Sergeant Preston of the Yukon are two of the most popular shows. Other classics include The Adventures of Ozzie and Harriet, The Jack Benny Show and Fibber McGee and Molly.

Other programming runs the gamut from news tailored to Vassar students, landscaping and gardening advice and a weekly discussion of disability issues, to a story hour, environmental news and a weekly look at Hudson Valley politics.

The home of American Pie

Marc Breslav is a Kent resident who moved his public relations and marketing business to Philipstown in 1987. He marked his 20th anniversary as a volunteer DJ at WVKR earlier this year. His on-air experience at five other stations included a stint at New Jersey’s WFMU, located directly across the Hudson River from Manhattan, a station Breslav considers legendary in the annals of freeform radio.

Marc Breslav is in his 21st year as a DJ at WVKR. (Photo by Arlene R. Seymour)

“It’s an artistic outlet for me — and it fuels my interest in music,” Breslav said of his role as DJ. He quoted Mark Twain when asked what makes WVKR unique. “If you don’t like the weather wait a minute and it will change!” His ability to consistently change what listeners hear is made possible by WVKR’s extensive archive with 30,000 CDs and 25,000 LPs. Breslav’s program, Radio Eclectica, airs on Thursdays between 6 and 8 p.m. “It’s an eclectic mix of lost rock, folk and blues,” he said. “It’s in the freeform, largely spontaneous tradition of early progressive FM stations. It’s not classic rock.”

One of Breslav’s most memorable nights behind the microphone came in 2005 when he interviewed Don McLean, whose major hits include “American Pie” and “Vincent.” McLean lived in Garrison in the 1970s and wrote portions of the former song while living in Philipstown. “We talked for an hour,” Breslav recalled, adding that McLean made it known he hates being asked about the meaning behind American Pie’s lyrics. Breslav got the message and avoided the subject. McLean liked the interview so much he called the next day to ask for a copy.

While he didn’t confirm it with McLean, Breslav said that there is a belief that the song’s words “drove my Chevy to the levee” and “good old boys were drinking whisky and rye” were inspired at the Cold Spring dock. A more definitive local connection is the cover of McLean’s self-titled third album, which features a photo of Cold Spring as seen from atop Rock Street.

Judith Kaufman came to WVKR as a disc jockey in 1993 before being hired as the station’s only paid employee in 2001, taking on part-time responsibilities as executive administrator. “Vassar students make up the executive board that runs the station,” Kaufman explained. “DJs are a mix of students and community members.” The station relies upon 60 to 80 volunteers at any given time.

Kaufman said she enjoys the variety of tasks she handles as administrator — and it’s a good thing. She deals with everything from IRS regulations governing charitable giving and FCC licensing procedures to copyright issues and digital royalties.

Having worked on-air, Kaufman experienced first-hand the qualities that set WVKR apart. “I can think of no other station in the area that has such a direct connection with its listeners,” she told The Paper. “Our programming is … tailored to the local listening audience … featuring shows that appeal to Jamaican, Indian, Japanese and Polish listeners” and many other demographic groups.

‘A curator of pop’

Cold Spring resident Sam Tallerico has been a DJ at WVKR for 10 years. His Lost and Found Oldies Show (L&FOS) airs on Saturdays from 1 to 4 p.m. 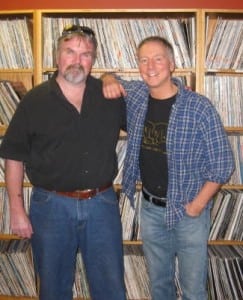 “I like to think of myself as a curator of pop music from the 60s and 70s,” he said. An American Sign Language interpreter in his working life, Tellerico includes “energetic surf, Motown, New Wave, rockabilly and everything in between,” on his play list. He also features vintage jingles and “guests” that include Jonathan Schmaltz, Bogus Barry Gibb and Johnny Tremendous as well as an occasional “Sammy’s rant.” Carla Springer and Open Book are among his favorite local artists who sometimes perform live in the studio.

Unlike Breslav who came of age listening to New York City radio, Tallerico grew up in a Detroit suburb, “glued to The Big 8 CKLW in the late 60s and early 70s. I’m constantly amazed at how many New York listeners tell me that they could pick up that Canadian AM station when atmospheric conditions were just right.”

For Tallerico, “It’s the passion of the voices behind the mic,” that make WVKR a compelling, radio experience.” Plus no annoying commercial blocks!”

He has several memories that are meaningful on a personal level but none more so than a recent email he received from a listener. “His father had passed away. He wanted his son to convey to me how much he enjoyed listening to L&FOS for so many years … it was humbling,” Tallerico said.

New Hampshire native Jay Lancaster is a 21-year-old Vassar senior majoring in English. He began working at the station as a freshman and is now its general manager. “Programs run from one to two hours, which allows for a more eclectic mix of sounds and perspectives than a lot of stations can readily offer,” he said. “My favorite would have to be Don’t Paint Your Teeth, run by my friend Aaron Bendich. He compiles a weekly playlist of bizarre singer-songwriter music from the deepest corners of the Internet and it’s always a fascinating listen.”

Lancaster has also learned quite a bit while at the station. “Serving as general manager … has been a seriously enriching experience … (an) incredible insight into how a radio station runs.” He plans on becoming a speech therapist but wants to stay in radio. “I’d love to continue DJ-ing for my local station wherever I end up.” Lancaster thinks college radio will be a lifelong interest for him, and he hopes others follow suit. “(I) hope that … students will continue to find the same value in it and keep this ball rolling for years to come.”

The cost of volunteer-based radio

Keeping that ball rolling comes with a cost. WVKR’s annual fundraising drive takes place the week after Labor Day. The goal this year is $25,000. Volunteers may be unpaid but Kaufman estimates the station’s annual operating costs at between $50,000 and $75,000. In addition to fundraising, student activity fees help support the station.

Tune in to WVKR at 91.3 FM or listen via the Internet at wvkr.org.