At Garrison Foundry Architecture (GFA), a firm co-owned by Philipstown’s Andrea (Annie) Mennes, the prevailing style is not set in stone, so to speak. “There’s not a super dogmatic approach to aesthetic,” Mennes says. “If we’re working in a more traditional mode we lend a cleaner edge, and if it’s modern we go a little looser, not too severe.” GFA’s principals, who include Mennes and a partner based in Chicago, are currently handling a mix of residential and commercial projects, some located in New York City, and others more local to this area, including the design of the just-opened The Hudson Room in Peekskill. (See related story.) 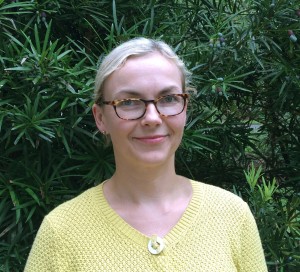 Mennes moved to Garrison about two years ago, one small child in tow and nine months pregnant with a second. Born in the Midwest, she and her husband were seeking a place where “kids could run around, not be constrained.” Like many before them, they came up on weekends, while living in Brooklyn, then decided to relocate, renting for a while in Cold Spring before purchasing a home in Garrison. Mennes originally envisioned Garrison Foundry as an umbrella firm for both architectural work and work in her other passion, jewelry design. The name was chosen to encapsulate each, the foundry component symbolizing “the detailed work of making a cast of something,” Mennes explained. The architecture work has dominated, however, since the firm’s founding.

Currently GFA is working on a residential landscape architecture project in the Village of Cold Spring, working in tandem with local landscape architect Erin Muir. They have also contributed to the interior design of the new Manitou School, set to open in September in what was the Plumbush Inn, along with several other residential projects. All this differs from Mennes’ earliest experience in her field — after graduating from Columbia University’s Graduate School of Architecture, Planning, and Preservation in architecture she worked in commercial architecture at Space4Architecture.

The Hudson Room project was a neighbor-to-neighbor proposition, as Mennes is, literally, a neighbor of Louis Lanza, The Hudson Room’s owner. The transformation of a large space, basically starting from scratch, according to Mennes, into a restaurant and music venue, replete with a large, newly-built stage, has just been completed. Mennes, while noting that she wasn’t the filing architect, designed the interior in a style she calls ‘industrial Deco’ taking her cues from some of the Pop Art which will hang on the walls, and the Deco-style bones of the building itself — that style, as pointed out by Mennes, frequently found in downtown Peekskill.

Mennes has enjoyed the project, praising the “great team of carpenters who processed the materials.” Features include a custom-built sushi bar made out of glazed bricks, and a player piano, painted the requested shade of “Ferrari” red, supplied by John Ford, of Ford Pianos, for whom the revitalization of the space as a music venue was a long-term goal which he found he could not himself realize.

Mennes hopes to continue what has been a fruitful beginning for GFA, splitting the practice between Hudson Valley projects — she’s interested in expanding beyond the immediate geographic region — and others in the city, including current work on two apartments in the West Village and a townhouse in Red Hook, as well as two restaurants in both locations. GFA occasionally expands beyond those borders as well. The firm is currently working on an urban project in Costa Rica, which came about through the auspices of Notre Dame University, to which her partner has connections.