Serving a mix of “globally-inspired, locally sourced” cuisine in a large room with a snazzy, Art Deco/contemporary décor, the just-opened The Hudson Room (THR) seeks to be the harbinger of a culinary and musical renaissance in Peekskill. Proprietor Louis Lanza, who has owned and operated a number of successful Manhattan restaurants — including Citrus and the now-closed Josephina’s — has been busy overseeing all aspects of this new establishment, the first of two he intends on opening within the next year. The other, a more casual grill / craft pizza / good-sized bar kind of place in what was the original home of Peekskill Brewery before its move to South Water, is targeted to open next spring. 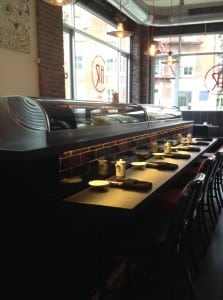 A view of the sushi bar at The Hudson Room.

Lanza has also recently purchased three other pieces of real estate in Peekskill, and will eventually develop those as well — some of the ideas he’s considering are a taco bar and a Cuban cuisine restaurant — saying, “We’re trying to organically grow this great little town” and joking, adding, “Maybe this is my way of not having to go back to Manhattan!”

With decades of experience in the restaurant and food business, Lanza calls THR “the culmination of 20 years of professional cooking.” The emphasis isn’t on any particular regional cuisine, but more of a broad “fine dining” with a true focus on thoroughly vetted provisions.

“We identify all the products we use, and unlike many other places which have jumped on the “farm to table” bandwagon and have only about 5 percent of what they serve be true to that we really can say where every ingredient is from,” Lanza says. “And our staff will be given daily handouts so they will be familiar with all of it.” Among the varied offerings will be sushi, prepared, at a custom-built sushi bar, by New York City chef Kevin Wong, who formerly worked at Citrus.

Although a large stage is a centerpiece in the restaurant, Lanza is quick to point out that “first and foremost, we are a restaurant — 100 percent. We’re working on doing a complete soundproofing of the ceiling, getting ready for future music, but a lot of that will be part of the special events we will have on Sundays,” he says. Currently closed on Sundays, it is envisioned that THR will be available for parties, wedding receptions and other special events on that day of the week. 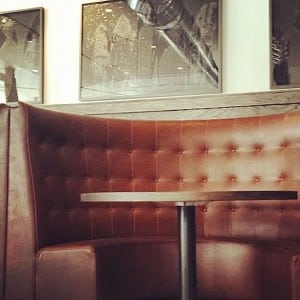 An Art Deco-inspired booth at The Hudson Room

Lanza feels that Peekskill warrants all that he has invested. “It’s a very central town, able to draw people from Westchester and the city easily. In my opinion Peekskill has the infrastructure and location. It has been passed over for Beacon and Hudson, but I feel that now with what I’m doing and drawing a couple more strong people, it will happen here, too.”

To that end, Lanza has become active in Peekskill civics, has joined the board of the Hudson Valley Center for Contemporary Art (HVCCA) and has reached out to some of the absentee landlords whose commercial properties sit vacant and unused. Citing an example of how he took one of his properties and made it available to a pop-up art gallery, re-vitalizing a quiet stretch, Lanza hopes to convince them to try similar techniques in jump-starting Peekskill’s downtown into a cultural hub, at long last.

“We set an example,” he says. “You can make your store and your property look attractive that way; I’m trying to motivate landlords to incentivize tenants.” Annie Mennes, who designed the interior of THR (see related story) calls Lanza “really involved in the development of Peekskill in the right way, using local people for projects.”

To draw city visitors, this fall Lanza, along with several other owners of Peekskill establishments, will start a free shuttle van service. Operating from Thursday to Sunday, the shuttle, called Go Peekskill, will take people from the train station to various restaurants and will also include a stop at the HVCCA on weekend days. If successful, it may expand from there. Working with other business owners, particularly other restaurateurs, is crucial in order for all to succeed, according to Lanza.

The bar at The Hudson Room.

Lanza still has two restaurants remaining in Manhattan, but, with his family now established in Garrison, where they operate Lanza Farms, he has definitely shifted focus. “This is my final stint in the restaurant business,” he says. I thought I would get out and get into farming, but now I’m very excited by it. I’m actually cooking, for one thing — I’ve been a line cook for the past couple of weeks, fine tuning, teaching the guys around me; my 7-year-old is helping out — life is great.”

One thought on “The Hudson Room Hopes to Start Peekskill Renaissance”