In July at a formal meeting and a Physical Services Committee session, they discussed a draft resolution contesting the federal move — without results. This time, the committee (and other legislators, commenting from the side of the room) informally agreed to seek more information on the federal intent before concluding whether or not to oppose the initiative.

A county resolution would be both symbolic — publicizing the legislature’s opinion but not enacting a county law — and significant, taking a policy stance as Washington weighs whether to finalize the regulations, championed by the Environmental Protection Agency and Army Corps of Engineers. The federal period for submitting comments on the case ends Oct. 20. 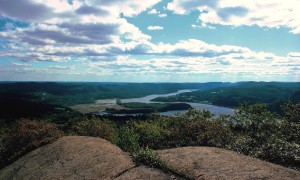 The Hudson River, from above Cold Spring: Anti-pollution advocates say the river benefited from the Clean Water Act; some of the law’s defunct provisions could be restored under a draft federal proposal. Photo by L.S. Armstrong

The federal initiative would bring seasonal streams, wetlands near rivers, and similar water features under protection of the Clean Water Act, a landmark anti-pollution measure adopted in 1972. Court decisions in recent years either limited the law’s reach or created confusing complexity, or both.

In a news release, the EPA and Army Corps argue that their proposal “does not protect any new types of waters not historically covered under the Clean Water Act.” They also say that “about 60 percent of stream miles in the U.S. only flow seasonally or after rain, but have a considerable impact on downstream waters” and that 117 million residents, one third of the population, “get drinking water from public systems that rely in part on these streams.”

Putnam’s draft resolution complains that “the Clean Water Act was not intended to protect ditches and other channels through which water flows intermittently” or encompass “wet areas, isolated man-made ponds, and other structures… .” It further asserts that the impetus for tighter rules should not come from the agencies but “only through the U.S. Congress and limited by the decisions of the U.S. Supreme Court.”

Putnam Highway Commissioner Fred Pena told the committee last week that the EPA-Army Corps proposal “provides no definition and limitation as to the control or invasiveness the EPA will now have” on activities “from a highway point of view, from a soil and water point of view, and from our own personal homes point of view. You can’t just say, ‘we control all waters in the contiguous United States.’”

A professional builder, District 5 Legislator Carl Albano, who chairs both the committee and the full legislature, Aug. 20 strongly opposed the EPA-Army Corps proposal. “It’s going to be the federal government stepping into somewhere else and costing everybody a lot of time and money,” he predicted. “The bottom line is, this will not make water quality any better than it is now.”

District 2 Legislator Sam Oliverio termed Albano’s claim “conjecture” but urged they seek an explanation of EPA-Army Corps’ authority if the regulations go through. Oliverio also said such tighter federal control “was originally in the watershed regulations. All this does is put back what was removed.”

Philipstown’s representative, District 1 Legislator Barbara Scuccimarra, called for legislative caution. Contaminants “from point sources are the biggest polluters,” she said, observing that western Putnam borders the Hudson. “It’s imperative that things don’t go into the river. I don’t want to take away from anything that would help keep the river [safe].”

Speaking from the audience, Philipstown Town Board Member Nancy Montgomery mentioned information in latter July from county aide that the legislature would not give the draft resolution any more consideration. Yet it ended up on the Aug. 20 committee agenda. “I have many, many constituents who have been watching this and want to know what the legislature is going to do,” she said. “I’d request you take no further action” unless the public is informed ahead of time that the legislature plans to address the issue.

The legislators then determined they need more facts on the reach of the regulations and the EPA-Army Corps jurisdiction.