“I can’t stop giggling,” Shirley Hot said. Last month, the proprietor of The Cup & Saucer Team Room in Beacon reopened her business as a theme restaurant based on the cult TV series, Doctor Who. The average wait for a table at The Pandorica, Hot’s new establishment, is now two hours or more. She says she receives 30 to 40 phone calls a day, and The Pandorica’s Facebook page is fast approaching 10,000 “likes.” Needless to say, business is good. 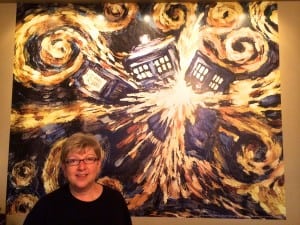 Shirley Hot, owner of Beacon’s The Pandorica, in front of an ”exploding tardis.”

Hot purchased The Cup & Saucer in 2007, after she worked there as a waitress and a cook. “For the last two or three years I was considering a redesign because Beacon had changed. Young families and a lot of young people were moving up from the city and they weren’t attracted to the place. It wasn’t their style. I figured I should become a little more contemporary.”

Without going too far into the complex storylines of Doctor Who, a science fiction show created by Sydney Newman, The Pandorica is a fictional underground prison beneath Stonehenge, the actual prehistoric monument in England. The series has celebrated avid fandom since it first premiered on BBC1 Television in 1963, the day after President Kennedy was assassinated. This past Saturday, Aug. 23, the newer BBC America series premiered its eighth season and its 12th Doctor, portrayed by Peter Capaldi (In The Loop, World War Z).

Hot, who is British, has been watching Doctor Who since she was a young girl. She credits a next-generation fan for alerting fellow “Whovians” of a destination in the Hudson Valley they should be sure to visit.

“A wonderful girl came in and asked if she could say something about The Pandorica on Reddit,” Hot said. “She did, and the post went straight to the front page. From there it was picked up by almost every blogger in the ‘Whoniverse.’”

The new interior of The Pandorica, formerly the Cup & Saucer Tea Room.

Hot says the timing of The Pandorica’s opening with the season premiere is purely coincidental and that she had hoped to launch earlier this summer. Still, she set up a cosplay (costume play) event at the restaurant last weekend, which sold out. The concept for the redesign is hers. Bill Miller Designs helped with the interior design and execution.

“It started with the bathroom. Angel, of Beacon’s New Air Design, turned it into a ‘tardis.’ I thought I’d call it the Who Loo,” Hot said. “A novice won’t notice the little details that a Whovian would, and that’s how I wanted it. I didn’t want anyone to feel intimidated by the theme.”

Some of these details include sunflowers on the table, from the 10thepisode of the fifth series, in which Doctor Who and his companion, Amy, bring Vincent Van Gogh to the Museum of Modern Art, via time travel, in an unsuccessful effort to avert the artist from suicide. On the entire back wall of the restaurant is a depiction of an exploding tardis, the blue police box that doubles as Doctor Who’s time-traveling machine. On the wall next to the Who Loo is a “crack in the universe,” a portal between dimensions, from the first episode of the fifth series.

The menu has also been revamped, slightly.

“I added a few items, but I kept a lot of the original tea room menu,” Hot said. “We kept the chicken salad and the salmon salad, the wraps and the antipasto salad. ‘We’ is me, I make all of the food.”

The Pandorica’s bathroom (inside the ”tardis”) features a symbol of one of the series’ mysteries.

New items include two versions of fish fingers and custard: an appetizer of real fish fingers with a citrus remoulade that looks like custard, and a dessert, which is batter-dipped French toast with a warm egg custard. The K-9s, named after Doctor Who’s robot dog companion, are mini corn dogs. The Galifryed Potato Pancakes pay homage to the Doctor’s home planet. The Big Bang, flaming sausages, is available only to diners who are 21 years of age or older.

The Pandorica’s legal capacity is only 40 people, including staff. In the restaurant’s outgoing voice mail message, a female voice (Hot’s) recommends that anyone traveling from outside a 100-mile radius should not bother to come until after Labor Day, when an online reservation service she plans to use will guarantee a table and presumably shorten the wait time.