A big part of Westchester Police Detective John Peters’ job description sounds straightforward: “To assist in investigations to determine the cause and origin of a fire.” But investigating fires, especially when arson is suspected, can be anything but simple. And anything but a one-man job. 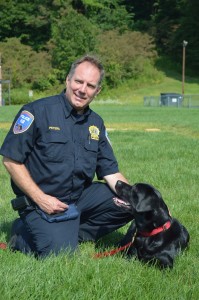 “Fire investigation is a team effort,” Peters said in a recent interview. One set of eyes just doesn’t work.” One of the extra pairs of eyes on Westchester’s arson team, and more importantly one extra nose, belongs to a dog named Daisy. Peters is Daisy’s handler — and the two are inseparable.

Peters grew up in Irvington and joined the Westchester Police Department in 1996, doing road patrol as a rookie. In 2001, he joined the detective division where he quickly became a Level II Fire Investigator, the highest New York State rating. His training as an arson detective has been “ongoing and constant” ever since. “Arson is my passion but I have to catch other cases too,” he said.

He has also been actively involved with volunteer fire departments since 1983. He worked his way up through the ranks to become chief of Irvington Fire and Rescue. Peters moved to Philipstown in 2002 and immediately got involved with the administrative side of the North Highlands Fire District where he now serves as a commissioner.

Drive, intelligence and a good nose

Daisy is an English Black Lab, a breed Peters said is well suited to arson duty. “They look for dogs that have drive, intelligence and are sniffers,” he said. “You need a dog that wants to please its handler. Daisy would do anything to make me happy — including going into a completely burned out building.” Commenting on her abilities Peters added, “Daisy is a tool — an amazing tool — in a fire investigator’s toolbox.”

Daisy was originally destined to assist people in wheel chairs but made a career change when assigned as a “sniffer dog.” She was sent to Indiana where she was imprinted to detect numerous fire accelerants — gasoline, lighter fluid and the like.

Intense training and a strong bond

Peters and Daisy were paired in 2012 as part of a five-week training program hosted by the Maine Criminal Justice Academy and State Farm Insurance. The latter funds the program to the tune of about $1 million annually. For the insurance company it’s a small investment, considering that billions of dollars of property are destroyed and hundreds of lives lost nationwide each year through intentionally set fires. “If one dog solves one fire the program has paid for itself,” Peters said. 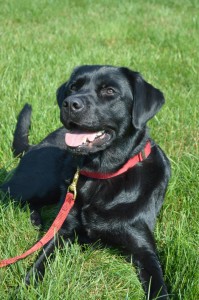 Daisy is an English Black Lab, a breed that has drive, intelligence and a keen sense of smell. She once identified an arson suspect in a police lineup.

Arson investigation training creates a bond between man and dog that is incredibly strong, one that Peters said few people get to experience. “It was one of the greatest experiences of my life,” he said. It is also an intense experience. “It was physically demanding and constant. Hundreds of drops of accelerants every day.”

In a “drop” an object is tainted with a small amount of accelerant and hidden. The canine trainee’s job is to find it. Sniffer dogs are trained using Pavlovian response. When Daisy searches for an accelerant she knows there’s a food reward awaiting her when she finds it. She’s good at her job but must be recertified annually at a training facility in Montour Falls, New York.

Sniffing out suspects — and evidence

Peters explained that the burden of proof often rests with the arson dog — and Daisy has proven herself many times. In one case she earned her reward by identifying a suspect in a police lineup. “Arsonists almost always spill accelerant on themselves but aren’t aware of it,” Peters said. In the lineup, Daisy went directly to the suspect, sniffed, and sat right in front of him — the passive posture she adopts to indicate she has found evidence. The suspect’s clothes were tested and the presence of an accelerant was confirmed.

One of the biggest mistakes arsonists make is assuming that no evidence will remain after a fire. “They think they can’t get caught — that all the evidence will burn. But there’s evidence left behind 95 percent of the time,” Peters said. Arsonists also sometimes can’t resist lingering to admire their “work.” When he arrives at a fire in progress that is suspected to be arson, Peters’ first step is to have Daisy sniff onlookers — a strategy that sometimes finds the arsonist standing in the crowd.

Her keen sense of smell often makes Daisy superior to her human colleagues, at least in terms of finding evidence. At a house fire in which two bedrooms were destroyed, arson detectives combed the two rooms looking for proof of arson — while Daisy found a small rag hidden in the undamaged kitchen that had traces of accelerant.

“Daisy finds evidence where no human being would have looked,” Peters said, in some instances as far as 300 yards away from the fire scene. “It’s amazing.”

During the interview for this article Peters and Daisy provided a convincing demonstration. Standing in front of the North Highlands fire hall, with Daisy waiting in his truck, Peters took out three small metal washers and placed a drop of gasoline on each. The reporter took them around the corner of the building and hid them in the grass on the baseball diamond — at first base, behind the pitcher’s mound and by the backstop — and then signaled Peters. When they entered the playing field Peters simply said “Seek!” and within about two minutes Daisy had found all three washers, and was rewarded accordingly.

Daisy has her own sports card. Yellow coins are used to mark locations where she finds evidence at a fire scene.

In 2013 there were 82 requests to use Westchester’s arson dog. Daisy was put to work on 67 of those cases. In total, 33 of the fires were caused by arson with nine listed as possible arson pending further investigation. Of the remaining fires, 33 were categorized as non-arson while seven were classified as “unknown.” Houses, cars, commercial buildings, boats and other recreational vehicles can fall prey to arson. The motive can vary, Peters said, from an act of revenge to hopes of an insurance payout.

Black Labs can serve as sniffer dogs for 10 to 12 years although in Westchester their career is limited to nine years. Daisy lives with Peters and his family and she will continue to do so when she reaches retirement age. “She’s our family dog and she’s with me 24 hours a day. I’ll keep her forever,” Peters said. “And she gets along great with our mutt.”

Life as an arson detection dog is not really work for the canine, Peters said. “Dogs like to be treated like dogs,” he said. “Daisy is having a great time when she works — for her it’s fun.” He bristles when the appropriateness of using canines in solving arson fires is questioned. “There are people who don’t understand and don’t support it,” Peters said. “I ask them ‘What does your dog do — sit in the house all day?’” Given the opportunity he said, “I can turn any non-believer into a believer — with one fire scene.”

Daisy has her own Facebook page. She is even pictured on her own trading cards, which Peters distributes, mainly to kids, when explaining the role of arson dogs.