The Philipstown Town Board last week pushed ahead on efforts to sell the municipally-owned VFW building on Kemble Avenue and in a unanimous vote approved the Continental Village Fire Department’s purchase of a new fire-rescue truck using a financing plan.

In its workshop Wednesday night (Aug. 27), the board also unanimously agreed to allow a new liquor store to open on the premises of the Countryside Motel on Route 9, using a temporary certificate of occupancy, with the stipulation that the operators provide $5,000 in escrow as surety, obtain their formal site plan approval by next March, and make all related improvements by next August.

The board members continued their discussions of the VFW, shortly after receiving a real estate expert’s appraisal on its value — details of which remained confidential. 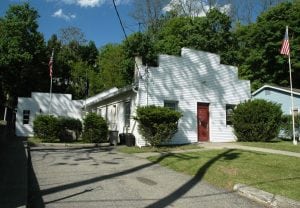 Destined to be something else? Located on Kemble Avenue, in the middle of Cold Spring, the VFW building, owned by the Philipstown government, could go on the real estate market soon. File photo by L.S. Armstrong

“We can go ahead and advertise to sell the building,” in the near future, Supervisor Richard Shea said. He recommended that the town government try handling the sale itself, instead of having a real estate firm do it, and said he would update the veterans on the latest developments. VFW stands for Veterans of Foreign Wars and veterans’ groups used part of the structure. The town and Village of Cold Spring have held meetings and run programs from the other part of the aging building.

Town officials want to use the revenue from the sale to help pay for renovations to Town Hall.

Within a couple days of the workshop, the agenda for the Town Board’s formal monthly meeting Sept. 4 included a vote “deeming the VFW property to be a surplus and unnecessary for town use and directing it be offered for sale to the highest bidder.”

After a public hearing that produced no comments, the board voted to permit the Continental Village Fire Department to proceed with its plans to use a lease-purchase agreement for up to $375,000 in financing to buy a new general-purpose fire rescue truck, whose total cost is pegged at $575,000. The CVFD volunteers had explained at an earlier meeting that they intend to cover the non-financed portion of the cost with money from reserves.

“It’s a piece of equipment you obviously need” and by signing off on the financing (which does not obligate the town to provide any funds), the board wants to help the fire company acquire it, Shea said.

After the board vote, a large delegation of CVFD members at Wednesday’s workshop and the Town Board traded mutual thanks and laudatory remarks.

Citing predictions of a severe, cold winter this year, Councilor Mike Leonard called purchasing a generator “a no brainer.” Should they defer the purchase, “if we have problems this winter, we’re going to be very sorry we didn’t” proceed, he said.

“It’s been on our list a long time. I’d say move forward on it,” Councilor Nancy Montgomery added.

Other board members concurred and decided informally to promptly review various details incumbent upon a wise purchase.

Should the town later obtain a different generator in a deal renting land for a cell phone tower at the landfill, the town-purchased generator can be relocated, Town Board members noted.