Both Planning Board and HDRB involved in detailed review

The Cold Spring Planning Board began what is likely the last phase of its review of the proposed Butterfield development of mixed residential and commercial buildings along Chestnut Avenue (Route 9D) on the site of the old Butterfield hospital. 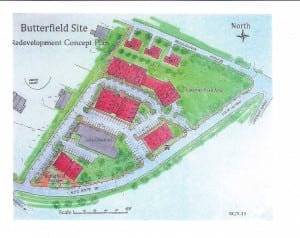 The map of the planned Butterfield redevelopment, as of June 2014, included with a letter sent to local officials (file photo).

The site plan review process will proceed through a series of public meetings during which board members will meet with developer Paul Guillaro and his staff to go over the numerous details involved in planning an elaborate mix of buildings and grounds.

The procedure will include examining a multitude of maps and drawings depicting in granular detail such issues as precisely where buildings will sit; how traffic will flow; whether the storm water system meets standards; sufficient water flow for fighting fires and supplying residents’ needs, right down to where the grease traps will be located if there is a kitchen in the community center planned for residents.

Planning Board Chairman Barney Molloy opened the meeting at the Village Hall by offering a proposed schedule of meetings and promising to post all relevant documents used at the meeting on the village website within three to four business days after meetings.

Chuck Voss, the board’s consulting planner, said a review of the preliminary submissions by Guillaro’s team indicated little in the way of changes from the original concept plan that the board had reviewed last winter. In response to member Arne Saari, Voss described the plans so far as almost identical.

Molloy asked if the plans conformed to the parameters of the new B4A zoning for the site and Voss said they did. The Village Board voted last May to rezone the site specifically to facilitate the project. The approval came after the Planning Board voted last February to declare that the concept plan would not have a negative impact on the village when a variety of potential issues were considered. That vote followed a 14-meeting review that began in September 2013.

Guillaro, after introducing his team, which now includes a site engineer, Joseph Riina and an architect, Ray Sullivan of the Connecticut-based Sullivan Architectural Group, began to discuss what he described as modest changes the plan now contemplates such as increased parking for both residents and the public, a building moved a little further away from a giant copper beech tree, and roadway improvements for better automobile traffic flow through the site.

Guillaro’s architect, Sullivan, displayed a preliminary drawing of a residential condo building explaining that the design goal was to “make buildings to an attractive residential scale.” The architect asked that the Planning Board make a referral to allow him to go before the village’s Historic District Review Board (HDRB), which has jurisdiction over the design plans for the buildings. 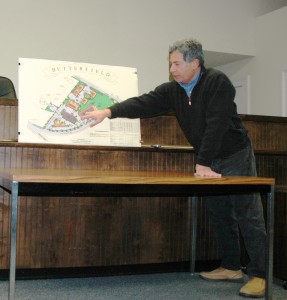 After some discussion it was agreed that when the developer formally presents the new site plan at the board’s Sept. 17 meeting, the time would be right for referral of the design plans to the HDRB which will also hold public meetings as it considers whether to approve a certificate of appropriateness for the project.

Sullivan has designed several housing complexes in the local region, including one in Ossining, New York, which can be viewed at his company website.

Planning Board member Saari raised the prospect of taking another look at the size and mass of the project, in particular the residential aspect. Board-appointed counsel Anna Georgiou opined that the scale of the project was already approved when the village trustees approved the new zoning. Saari said that absent fellow board member Anne Impellizzeri had similar concerns and he would defer further discussion until her return at the Sept. 17 meeting. Karn Dunn and James Pergamo are the other two board members.