Fittingly, just after Labor Day, Cold Spring’s Peter Sanders will see the theatrical release birth of his second cinematic child, when his documentary film Altina debuts at the IFC center in Greenwich Village.

Opening on Sept. 12 for a week-long run, the film will also screen a week later in Los Angeles at the Laemmle Musical Hall Theater. 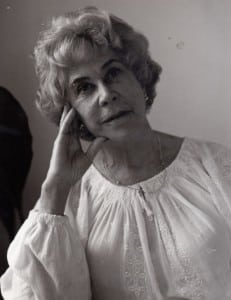 Altina is a biographic portrait of Sanders’ grandmother, Altina Schinasi, frequently called Tina, whom he describes as “an artist and heiress who broke all barriers in a man’s world.” It won the Best Film and Best Director awards at the Toronto Jewish Film Festival in 2013 following its November 2013 debut at the Jewish Film Festival in Jerusalem.

Mixing still photography, period footage, an interview with his subject filmed when she was 84 years old, and extensive commentary from an assortment of her colleagues, friends and family, Sanders has created a vivid portrait of a woman whose personal and artistic life often flaunted the conventions of the 20th century — a century which dovetailed almost identically with her lifespan of 1907-1999. Sanders calls the film “an homage to women and their struggles and challenges during that period … Tina broke free from most of the confines that most other people lived with.”

The lives she led

Born into wealth, the daughter of Turkish Jewish émigré parents, her father inventing the first cigarette-rolling machine — the patent and subsequent production leading him to magnate-level status and a huge, still-standing mansion on Manhattan’s Riverside Drive — Tina’s youth was an economically privileged one. But even at an early age, though her wealth brought her a comfort level, she always ventured forth, possessed of an abiding creative energy.

“Obviously her economic situation helped her make decisions,” Sanders says, “but it didn’t lock her in in any way.” After an early marriage, followed soon after by a highly unusual for the day divorce, Schinasi charted her own path.

“Once she got divorced, she decided she did not have to live under the pressures of what her family wanted her to do,” explains Sanders.

From those beginnings, Schinasi, the definition of a free spirit, her behavior dictated by her own desires, led a peripatetic life. There were three more husbands, one the love of her life who contracted tuberculosis, another, a Cuban, decades her junior, who shared her last years with her. He speaks of her both movingly and with a wink in his eye. 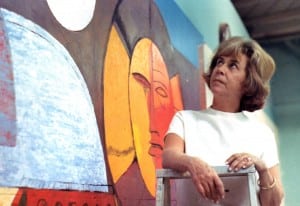 Altina Schinasi, regarding her own artwork.

Schinasi’s geographic journey took hops, skips and jumps across the country, with years spent in Los Angeles, then Washington, D.C., and finally in Santa Fe, New Mexico. Throughout these years, Schinasi was consumed by her art. Working in a variety of media, primarily sculpture and painting, and also filmmaking, she was always seeking new forms, moving from one to the next when curiosity overtook her.

Though the film moves chronologically through Schinasi’s life, Sanders says he “made her art life anachronistic — I used her husbands as goalposts and the cities she lived in told me of the different lives she led, but I kept the art anachronistic because some of it never changed … Her life I kept to a timeline, her age, though, was ageless.”

Schinasi’s questioning mind led to the thing she is most known for: the creation of “Harlequin” cats-eye glasses. Inspired by Venetian masks, she deemed the standard glasses of the day unattractive and, after coming up with her novel design, tried and failed to interest manufacturers before walking into an upmarket Madison Avenue shop and convincing them on the spot. The glasses became all the rage, and led to Schinasi’s formation of a company, based first in New York, and then Los Angeles, which produced the frames.

Ultimately finding the responsibilities of running a business not to her liking, especially objecting to the still-prevalent segregation of African-American workers, she shut it down and shifted focus to film, producing a documentary about her early art teacher, the famed painter George Grosz. The film, Interregnum, received an Academy Award nomination in 1960, among other honors. 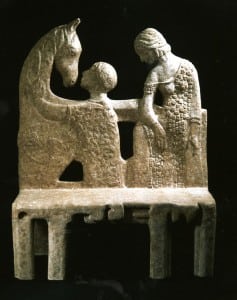 A ”chairacter” designed by Altina Schinasi

Schinasi’s social justice concerns are touched upon in the latter part of the film. Her time in Los Angeles coincided with the McCarthy era, and mention is made of her sheltering of one of the “named” and blacklisted directors of that time, John Berry. After relocating to Washington, D.C., in the ‘60s, with her third husband, Schinasi supported the civil rights movement.

The thread connecting all is her artwork, which, by the ‘70s, had shifted largely to creating scultpures out of fiberglass and then wood. She developed what she called “chairacters,” chairs and benches based on humanistic forms, described by Sanders as “large, almost life-size chairs and benches depicting lovers in passionate embrace or turning away from each other to express the absence of love.” Never seeking to become famous from her art — the brief burst of it surrounding the harlequin glasses sufficed — she made, as Sanders says “art on her own terms, always trying out new formats.”

Sanders’ sister Victoria first came to him with the idea of making a film about their grandmother. Sanders, who began his working life as an actor before shifting to broadcast journalism (he has an M.A. from New York University) had completed his first film, The Disappeared, which began its life, in shorter form, as his thesis. The Disappeared, which concerns a quest by the son of two of Argentina’s desaparecidos to locate the parents he never met, as they were amongst those vanished in the “Dirty War.” Faced with the choice of getting a job as a reporter or expanding the thesis material into a documentary feature, he chose the latter, because “I was so involved with the subject; it was bigger than me — I was inside the story and I had to get it to the end.”

With Altina he calls Schinasi’s art and social activism his main thrust. Interestingly, after using what he describes as a “treasure trove of compelling documents to work with: letters, photos, archival footage, old press materials, and artwork, an abundance of materials both challenging and difficult,” he completed a rough cut of the film. It was only then that his uncle, Terry Sanders, also a documentary film director, surprised him with archival footage of extensive interviews with Schinasi, which took place in 1991. 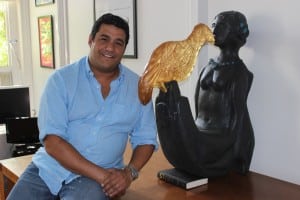 Peter Sanders, pictured in his office, next to a sculpture by the subject of his documentary, Altina Schinasi. (Photo by A. Rooney)

Immediately altering the film, Peter Sanders says, “This material changed it for the better; it could never have been a complete story without those tapes. This is now a real and fully introspective portrayal of her. She tells the story and I simply edit it. If you have the ability to hear what she says — that’s what makes the audience connect.”

Indeed Schinasi’s frank commentary relating to her own, freethinking, freewheeling life, informs the film to such an extent that it is difficult to imagine it minus this footage. Sanders says the film has been very well-received by his family.

Altina took two years to make, then populated the film festival circuit, where it was noticed by documentary film agent Josh Braun of Submarine Entertainment, which Sanders calls “a huge stroke of luck.” In addition to the theatrical release, First Run Features has home video and Internet distribution rights, likely to take place this December, all of which “has made a big difference in how the movie will get seen in the future.”

He also hopes to have Altina available on Netflix at some point. The Disappeared can be viewed there now. Sanders intends to show Altina and The Disappeared in Philipstown in the near future. He invites locals interested in seeing the films to email him at [email protected] to be placed on a list alerting them of when and where.

Sanders, his wife Daisy Hill Sanders, an art dealer specializing in American art, much of it from this region, and their two young sons moved to Garrison several years ago.

“We visited Cold Spring, saw a beautiful house, fell in love with it first and Cold Spring afterwards, and we love it here,” he declares. “It’s a wonderful place to live a fantastic life.”