It must have been a déjà vu-moment for members of the Philipstown Town Board at their Thursday (Sept. 4) meeting as they listened to a number of residents make the case for and against paving a section of dirt road. This time however, the discussion did not center on Old Albany Post Road but rather East Mountain Road South, located off of Route 9 just south of Philipstown Plaza. 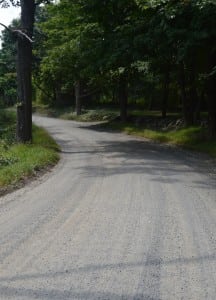 The debate over whether or not to pave a portion of East Mountain Road South has begun.

Town Supervisor Richard Shea said that two weeks earlier, the Town had received a petition requesting that part of the upper section of the road be paved. A number of letters opposing paving were also received, setting the stage for Tuesday’s discussion.

Several residents spoke and were equally divided on the question. Two of them, Grace Snowden and Robert Juby, both residents on East Mountain Road South, epitomized the differing views.

Living in a ‘dust bowl’

Snowden moved to Philipstown 30 years ago. Twenty years ago she signed a petition against paving the road. “I loved the road … I never thought I’d ask (to have it paved),” she said. But things have changed in recent years according to Snowden. While such factors as a dramatic increase in the amount of traffic and the number of accidents are significant in her mind, one factor outweighs them all — the dust.

“The amount of dust is unbearable. We live in a dust bowl and we’re suffering daily,” she said. “For my own health … I beg the board to look at paving,” she said.

Juby, who moved to Philipstown in 1979, referred to East Mountain Road South as “such a special thing to have.” He said that everyone who moved there knew they would be living on an unpaved road. “Then all of a sudden, the unpaved road (means) ‘there’s dirt on my car’… I just don’t get it,” he said. “Dirt roads are definitely safer — they’re slower.” Juby said he sympathizes with those who are concerned with the dust problem but that the Town should look to alternatives other than paving to control it.

Others who oppose paving cited the Town’s Comprehensive Plan, which emphasizes the importance of preserving rural character including such features as dirt roads and stone fences. They expressed concern that paving more of the road would mean even more traffic, in particular commuters from East Fishkill who would use the road as a shortcut to Route 9.

Grace Snowden, left, and Robert Juby, right, both live on East Mountain Road South but differ over whether or not the road should be paved.

More than one resident also said they believe that paving even a small section of the road would prove to be ‘incremental,’ inevitably resulting in the entire road being paved.

Those in favor of paving outlined additional factors such as the negative effect that dust from the road has on plant life. One resident described the road as “a mess’ in its current state, pointing to frequent washouts and the washboard effect that occurs after significant rainfall. Also mentioned was the need to use “five times as much salt” on dirt roads.

Shea disputed the notion that paving a small portion of Mountain Road South would incrementally lead to paving the entire road. “In my 13 years on the board less than a mile of Philipstown’s roads had been paved,” he said. He also pointed out that the decision to pave East Mountain Road North, a move he opposed at the time, was part of a two- to three-year process. “It didn’t happen overnight” he said. “This discussion will continue.”

After the lengthy discussion of the pros and cons of dirt roads, there was at least some irony in the board’s approval of Highway Superintendent Roger Chirico’s request for authorization to purchase a new road grader. The new Volvo grader will cost $180,312. Shea said that Chirico had “done his homework” and had been unable to find a used grader in good condition, a strategy the Town has used in the past. It is the first time that the Town will purchase a new unit. “We use (a grader) every day,” Shea said. “It is a necessary piece of equipment.”

The VFW Hall on Kemble Avenue, which is owned by the Town of Philipstown, is being sold. Trustees approved a number of steps to initiate that process including accepting an appraisal of the property, declaring it as surplus and advertising the sale in local newspapers. The property, which includes approximately a quarter-acre of land and a 3,928-square-foot building, is valued at $235,000 according to the appraisal completed by McGrath & Co., Inc. 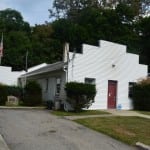 The VFW Hall on Kemble Avenue is up for sale.

Commenting on the sale, Shea said that the cost of heating and cooling the building year-round was a factor. “It IS surplus … we can get along without it,” he said, adding that selling the property had been thoroughly vetted and that local veterans “are OK with it.”

He also said that the sale of the property “will give us some capital to work on the building next door.” Shea was referring to the Dahlia House, a former residence located on Cedar Street immediately adjacent to the Town Hall, and also owned by the Town. The Town Board has long discussed renovating that building, making it an annex to the Town Hall.

Seniors to Cablevision: Give us a break

Jan Thacher, a resident at Chestnut Ridge in Cold Spring, appeared before the board, urging the Town to support a petition being circulated, that asks Cablevision to provide discount rates for senior citizens and veterans. Thacher said that the petition has already garnered 500 signatures, even though it has only made the rounds in Cold Spring and Garrison thus far. That total will likely increase dramatically once the rest of the Town is canvassed, Thacher said.

“We have to do something about a core cable price for the elderly and people on fixed incomes … (currently) the price increases every month,” Thacher said, suggesting that Cablevison could institute a fixed rate for seniors, similar to the promotional price offered to new customers.

“It’s a reasonable request … there are not a lot of options for cable,” Shea said, adding that he was impressed with the number of signatures that have been gathered. “We have limited leverage (with Cablevision) but we have some.” Cablevision officials will soon meet with the Town Board to discuss renewing their agreement with the town. In 2013, the town received $125,884 in Cablevision fees as part of that agreement. Town Board meetings are broadcast on Cablevision’s public access channel.

In other business Town Clerk Tina Merando was authorized to advertise for bidders to repair the culvert at the Indian Brook Road, a step that will allow the Town to move toward reconstruction of the bridge that suffered hurricane damage.