John Fasulo persevered with photography even as Parkinson’s disease made that avocation increasingly difficult over the course of 12 years. A former network television cameraman, drawn to adventure and even more drawn to rail yards, steam locomotives and the people who worked on them, Fasulo had a second career, also decades-long, as a photographer, specializing in what fascinated him: trains.

Now Hudson Beach Glass, in association with Fasulo’s friend and fellow professional photographer Joseph Squillante, has put together an exhibition of approximately 40 of Fasulo’s photographs, along with some personal memorabilia and a video about his work and history as both a tribute to the Beacon-born and bred Fasulo, and to raise funds to benefit Fasulo’s 13-year-old daughter, Maya; Fasulo passed away in May at the age of 64.

Portrait of John Fasulo, 2010, at Steamtown National Park in Pennsylvania, by Gary Miller

In fact, this exhibit was not originally planned as a posthumous one. According to Hudson Beach Glass’s John Gilvey, the show was originally scheduled to run in May 2014, the 40th anniversary of the Poughkeepsie Bridge fire, the subject of many of Fasulo’s photos. Fasulo was actively involved in planning it, writing up notes, etc., but he became too ill to continue. As his condition grew more grave, Fasulo told Squillante, “I want you to hang this show if I run out of my nine lives.”

The exhibit, entitled, A Trilogy of Trains: Images from Around the Bend and Across the Sea, opens on Second Saturday, Sept. 13, with a reception from 6 to 9 p.m. and runs through Nov. 2.

Although Fasulo credited his television work as training for his far more personal photographic work, the real impetus for all of it was his grandfather, who worked as a machinist for the New York Central Railroad. In Fasulo’s own words, written expressly for this exhibit: “It all started with my grandfather; we all called him, ‘Pop.’ I credit Pop for my passion for photography and trains by bringing me along on his trips to New York Central’s Harmon Diesel & Electric Shops where he worked. This opened me up to a world of awe and wonder, which continued to inspire my work. It was Pop who gave me my first camera. I’ve been taking photos ever since.” That first Brownie box camera will be on display at the exhibition.

Aboard his own ‘Polar Express’

In an interview with Michael Daecher, which ran in the Beacon Dispatch in April 2005, Fasulo recalled, “In some respects I had my own ‘Polar Express’ when I was a kid. We were able to ride the train for free because he was an employee … When I was a kid trains were everything. From Polk’s we’d go up to see Santa Claus at Macy’s, and hike back up to FAO Schwarz, which at the time had real quality toys — things you wouldn’t find anywhere else … Growing up at that time was when I started taking some of my first photographs.”

Although Fasulo wanted to be a photographer, “… that didn’t seem to be moving along. And I also had an interest in television. So I was introduced to the chief engineer at WOR, and I got a job as summer relief cameraman working for six to eight months while people were on vacation. So I started working on television shows.”

John Fasulo’s ”Kevin McGarvey, Engineer, Livonia, Avon & Lakeville Railroad,” 1974.  Fasulo’s notes explain: ”The object in his right hand is the stack fan used to draw air over the coals creating a draft and heating the boiler quicker to bring up steam faster.

Fasulo continued working as a cameraman for over two decades, working for many of the major networks. He also produced and operated the camera for a regional show for WTZA, Kingston, called On The River, which documented the impact of the Hudson River on the area and how it has been a recreational and economic resource to those on its shore and in the surrounding areas.

Shifting to photography, Fasulo, greatly inspired after meeting American steam engine train photographer David Plowden, started photographing what inspired him: trains. His work found homes in many collections, such as The Mercantile Library at the University of Missouri and the German Railway Museum. His photography was featured in Railroad Illustrated Magazine, Trains Magazine, and Modell Eisenbahner (Model Engine) magazine. In a Q-and-A interview published online in the Cerise Press journal in 2010, (“Back to Photography: John Fasulo” by John Fasulo and Greta Aart), Fasulo states:

I have always wanted to include the human side of railroading in my work, not just the motive power. While I enjoy the chase of an excursion train as much as the next guy, my preference is the image of the crew getting steam up and tinkering around the engine early in the morning; or a photo of a freight conductor hanging from a gondola switching out cars on a factory siding. That’s why you’ll see few roster shots from me and lots of images of railroad workers going about their jobs. Like Kertész, I’m looking for “the decisive moment … Photographs are only as honest as those who take them.”

The Hudson Beach Glass exhibit will focus, in particular, on three events which occurred within the time frame of a few months in 1974: the Poughkeepsie Railroad Bridge fire in May; Fasulo’s most prominent image, that of Kevin McGarvey, “The Engineer,” and the closing of the last all-steam division of German railways in Hof, Germany, during that time, the latter the subject of a one-man show held at the German Railroad Museum in Nuremburg. About the latter, Karlheinz Haucke, chief editor of Modelleisenbahner magazine called the images “expressive, diverse, unadorned and yet compositionally brilliant.”

In other components of the show, Squillante has taken photographs of 40 photos not included in the show, and has put them onto a continuous video loop, to be shown. Also to be shown is a 2010 video interview, conducted by Gary Miller. To accompany the imagery, audio recordings of steam engine sounds will be played.

Brilliance from the darkroom

Squillante, who first met Fasulo in 2008, when Fasulo was organizing a “Day In the Life of Beacon” photography event, says he has been honored to put the exhibition together. “We were close in age, and naturally when you have a contemporary, there is a real connectedness. He describes Fasulo’s works as “… in a long tradition of fine photography, from the darkroom.” In notes for the show he states: “John’s work captures both an appreciation and marvel of the last generation of steam trains. This exhibit is a testament to his legacy as a great photographer and chronicler of the grandeur of man and machine. He had the spirit to inspire and motivate all those he met. He loved life and most of all his family.” 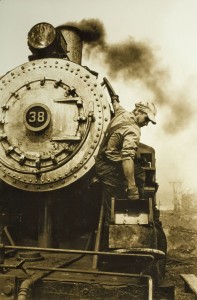 A Trilogy of Trains is also a benefit for Fasulo’s family. All sales, including those from a silent auction of a Fasulo photograph of Pete Seeger, autographed by Seeger (the auction runs through the end of the exhibition in November) will go into a college fund for Fasulo’s daughter Maya. A GoFundMe account has also been set up for this purpose.

“Spirit of Beacon: One Week of Photography” project will take place during the first week of May, with participation from 30 amateur and professional photographers.