The 48 children attending the brand new Manitou School on its opening day, Sept. 8, surely had that first-time mix of jitters and excitement, but probably not to the extent that the school’s director, Maria Stein-Marrison, did.

After years of planning, and a relatively short journey to execution, the private school, located on the site of the former Plumbush Inn, in Cold Spring, welcomed these first students into the expansive, 1867-built property. Listed on the National Register of Historic Places, the main structure has been extensively renovated, with an emphasis, exemplified by the many light-filled, multi-windowed rooms, on bringing the outdoors in.

The Manitou School, which currently serves students from pre-K through fourth grade, began its life as a preschool, Manitou Learning Center, just two years ago. The carefully developed curriculum there, bilingual and experiential, is at the core of the school now, and in fact the extension of the preschool to include elementary has been part of the plans since inception.

The search for a schoolhouse

Years, dating back to before Manitou Learning Center began, were spent searching for a location. When Plumbush Inn was suddenly put on the market, Stein-Marrison and her partners recognized that it was just what they were looking for and purchased it quickly.

“It was an ideal spot, central and spacious, yet has the feeling of being in the woods as it is set in five acres; our vision has always been to have a private school in this scale,” she says.

This room, with extensive windows, functions as both an art space and a lunch area.

They immediately got to work, with a ‘no wiggle room’ absolute deadline of 15 months, from starting the change of use process with the Philipstown Planning Board in June 2013, to the thicket of permit-issuing, construction, and landscaping which ensued. Not without hurdles — there were queries raised and addressed in some fashion relating to sprinkler systems, traffic flow, a fence surrounding the property and handicap accessibility — nonetheless Stein-Marrison calls the work itself, which began this February, “phenomenal” and credits her contractor, Tom Ptacek, architect Tim Rasic, and many others with “working so hard — they were here all the time, and they got it done, and done right.”

While all of the property infrastructure was going on, Stein-Marrison continued to run the preschool while recruiting a staff. Actually recruiting isn’t the best description, as Stein-Marrison was deluged with applications from teaching candidates. “We had an overwhelming response, and hardly needed to advertise,” she says. In choosing, Stein-Marrison said she specifically sought people who “wanted to build the school with us, to be as thrilled to be here as we are to have them here.

“People who understood and got the philosophy of the school, which is teaching the whole child, nurturing that love of learning — that was the most important thing, along with solid credentials. And the people we found have very solid credentials, masters from places like Fordham, Bank Street, Columbia and Sarah Lawrence, but also, we’re new, and we needed people who could roll with the punches. I’m the director but I’m also everything else, including bottom wiper, so we needed people with flexibility. We expect our staff always to be growing and learning, to want to do professional development and to be open to trying things in a different way.”

Being bi-literate, not just bi-lingual

With its immersive bilingual Spanish/English approach, several of the teachers were also required not only to be fluent in the language, but to be native speakers, the better to emphasize not just basic vocabulary, but reading, writing and thinking in both languages. 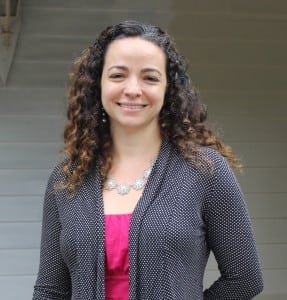 “We practice all parts of speech, not just nouns and verbs; we speak to them in full sentences from the beginning, we do a lot of songs and movement in Spanish and also introduce cultural elements,” Stein-Marrison explains. For the English-speaking native teachers, being bilingual was a plus.

On a tour through the facility during the second day of classes, there was actually a sense of calm, with children engrossed in their activities, which disappeared into the excitement of moving on to the next one on the agenda. The youngest group, the 3- and 4-year-olds known as the “Stepping Stones” had made self-portraits and were later listening to a story, with questions posed to them interspersed throughout the reading, and concepts like “It’s OK to be embarrassed; it’s OK to dance by yourself” thrown out for them to grab onto.

This early emphasis on social and emotional development is key, says Stein-Marrison, who notes:

We have a very explicit curriculum, and these types of things are woven into everything. In these early years we’re giving them the vocabulary, words for their thoughts, the physical sensations they’re feeling. We’re getting them to recognize and identify what they’re experiencing, and then learn appropriate and inappropriate ways of expressing them, for example purposefully saying “I want to tell you I’m really mad at you” rather than punching. This continues, goes all the way up with the older children, in a much more sophisticated way. There, they may write about it and add in how a piece of art or music might make them feel. It’s all age-appropriate and grows with them. This social and emotional component always runs alongside the academics, throughout the years.

Meanwhile, the pre-kindergartners, slightly older, were working on “handwriting without tears” making letter shapes out of all sorts of materials and objects before finally using an actual workbook to write those shapes out. First graders were enjoying lunch outside. Many of them had attended Manitou Learning Center, though not all, and those who had “are pretty fluent in Spanish, and they work with those who aren’t,” explains Stein-Marrison. For the older grades, since they are new, “we’re assuming children don’t have a background in Spanish yet, and the kids who have none are catered for, too,” she adds. The school has pledged to add a grade each year, through and including sixth grade, to move along with the students.

This year the school has enrolled 48 students, a number Stein-Marrison is pleased with. “Our goal was 40 and we would have been happy with 35, so this is great.” Thus far the students come almost exclusively from Philipstown and Beacon, with some interest from Fishkill, but Stein-Marrison would like to see the geographic range expanded through time, and there is an eventual goal of about 75 students attending.

First grade teacher Adam Osterfeld confers with a student, who takes it under consideration!

As for what should draw the parents of these current and potential future students to Manitou, for of course all of this comes with a hefty price tag attached — a consideration or more than that for most — Stein-Marrison says, “We’re invested in getting to know every child and understanding what motivates and drives them so that we can be both nurturing and challenging. You want to challenge them, and to come from a safe place doing that, and also you must have the basic content knowledge. Beyond that, how does this child work? All that we do has really been thought out, for example our bright, airy classrooms, our playground designed to look like it’s part of nature, the Socratic method we use in our classrooms.

“Our teachers are facilitators of knowledge, there to ask the questions which teach the students how to think. We help children get to know themselves because they need to know how to engage with the world. We want to create responsible local and global citizens. How do you practice social responsibility? What is my relationship to the rest of the world and to the planet? Here we have close relationships with all our parents, because education must be collaborative. We ask parents a lot of questions about their child. Our conferences are based on narrative evaluations — what we’re observing in terms of cognitive language arts, movement, emotional and social development and gross and fine motor skills … We’re responsive, and we will make adjustments if we think it’s the right thing.”

In addition to the regular school program, Manitou also offers after-school programming and care services, with many programs open to the community. Visit the website for more details.

For more information on The Manitou School, located at 1656 Route 9D, visit manitouschool.org or phone 845-809-5695. The school will accept applications for midyear entrance and will evaluate any others on a case-by-case, rolling basis.

One thought on “Manitou School Opens in Cold Spring”