Good for you and easy to grow

There’s nothing better than a fair devoted to a single food. My favorite involves a balance that includes a plethora of food with that ingredient highlighted throughout the concession stands alongside growers who will talk up their crop and sing its praises, as well as encourage me to grow it. The Hudson Valley Garlic Festival in Saugerties has been worth repeated annual visits for its success in meeting my standards. Strawberry festivals and corn festivals are fun, but beyond shortcake and corn on the cob, I’ve been disappointed with the commitment by the food vendors to incorporating the featured ingredient. (FYI, corn dogs don’t count.) 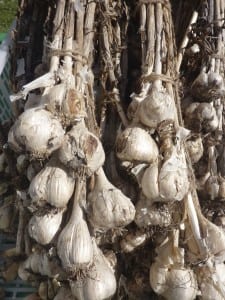 A stalk of garlic bulbs is an old world edible ornament for the kitchen in winter.

Garlic, however, is a pungent and potent ingredient and lends itself to all sorts of creative menus and dishes that require some daring to sample. Garlic ice cream, garlic shooters, and garlic cheesecake are just a few of the tasty offerings I’ve tried.

First things first, though, always go to a garlic festival with a companion who is also going to eat a lot of garlic. Things can get tense on the ride home if only one half of the party is partaking.

New York is one of the top five states for garlic production in the U.S. California leads, but as it has become more popular for its health benefits and foodie credibility, more and more farms are adding it as a crop.

According to the Penn State Extension, each person in the U.S. eats about 2 pounds of garlic per year and consumption has increased fourfold in the last few decades. Allicin is the chemical in garlic that makes it useful in treating a range of health conditions from heart disease to liver function and even snakebites. Garlic is touted as the cure for just about anything that ails you.

Garlic, or Allium sativum, is easy to grow, as I’ve written previously, and the garlic festivals are held in the fall because it’s harvested in mid-summer and planted in October, preferably after the first frost up until mid-November. I didn’t get it in the garden until Thanksgiving one year and still had a decent crop, but I got lucky that I didn’t have to dig through snow to put it in.

Garlic can be very mild and almost sweet, fiery and intense, smoky, sharp, nutty and everything in between. Hardneck and softneck garlic, the kind found at most stores, have different uses for cooking and grow differently, too.

Here’s a quick refresher on growing garlic. It sprouts from a single clove, not the entire bulb, but talk about value. Purchase a bulb that has a dozen cloves and each of those cloves can then produce a new bulb with a dozen cloves.

The pointed head of the clove should be facing up when it’s placed in the soil and it should be planted about two inches deep. Garlic likes full sun and will thrive in soil with a pH between 6.5 to 7, which is the range for most vegetable gardens. If you’ve already got a healthy garden plot, it probably doesn’t need anything special for garlic.

Sunshine is critical, though. I tried to grow garlic this year in less than full sun and it didn’t mature. The bulbs were undersize, too small to use, very disappointing. Some plants can tolerate variations in their growing conditions, but my experiment proves that garlic must have full sun.

I don’t worry about crowding garlic in a row or bed. Space the cloves close together, up to 1 inch to 1-½ inches. Since garlic overwinters in the garden, mulch it with a layer of straw to protect it from the freeze and thaw cycle during the winter. Those little cloves will be warm and ready to sprout in spring. In my garden the past two years, it’s been the first sign of growth.

The Saugerties garlic festival is held annually the last weekend in September and there are other big events around the area further upstate in New York and in Connecticut, Pennsylvania and Massachusetts over the next two months. The Garlic Seed Foundation website has listings.