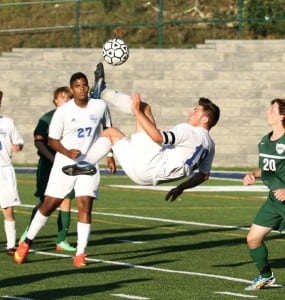 Aidan Draper defies gravity in varsity boys soccer’s 2-1 win over Brewster on Sept. 15 at home. Goals were scored by Tucker Hine and Draper.

Blue Devil varsity football posted a 38-10 victory at home on Saturday, Sept. 13, against Yonkers Montessori Academy. On his first win, Coach McConville said, “We wanted to come out and control the game right from our first possession and we were able to do that this week.”

Fullback Matt Balducci wore down the YMA defense with 24 carries for 201 yards, five tackles, three touchdowns and one kickoff return for a touchdown. Quarterback Tyler Giachinta went seven for 10 with 71 yards, one interception and one passing touchdown. Ryan McCollum had five catches, gained 45 yards and scored one touchdown. Matt Koval had eight tackles.

Homecoming under the lights

For the first time ever the Haldane Football Homecoming game will be played Friday, Sept. 26, kickoff at 7:15 p.m., under rented lights at the Lawrence Brigati Field. The funds to rent the lights were contributed by local businesses. The parade on Main Street will commence at 6 p.m. and the Senior Recognition Ceremony will precede kickoff.

Haldane crushed Pawling 10-1 at home on Sept 11. Bailey McCollum led the team with four goals. On Sept. 13, it was Marina Martin’s turn to take the lead for four goals at Putnam Valley. Allie Monteleone and McCollum each scored for the 6-0 victory; Monteleone also had two assists. Missy Lisikatos and Sara Jacoby were strong on defense.