After initially declining Cold Spring Mayor Ralph Falloon’s request to change the time and place of a meeting of the Putnam County Physical Services Committee to discuss the Butterfield project and numerous potential services that the county may offer there, Committee Chair Carl Albano has had a change of heart. The meeting will still take place on Tuesday, Sept. 23, but it has been moved to 7 p.m. at the VFW Hall on Kemble Avenue.

Falloon had corresponded with Albano on Sept. 10, indicating that holding the meeting at 6 p.m. at the Village Hall would not serve the public well, suggesting instead that it be held at 7:30 at Haldane School. 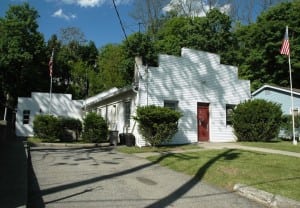 The decision to move the meeting to the VFW came about at a meeting held by the Physical Services Committee on Tuesday (Sept. 16). Putnam County Legislator Sam Oliverio led the argument in favor of honoring Falloon’s request to change the meeting plans.

“I pushed hard for it,” he said, indicating that he preferred meeting at Haldane at 7:30 as Cold Spring’s mayor had suggested, but that the compromise was at least better for commuters than a 6 p.m. start time. Oliverio also confirmed a comment posted on Philipstown.info that Putnam County Legislator Barbara Scuccimarra spoke against changing the meeting time and place.

Contacted by The Paper, Scuccimarra said that she was definitely not against changing the venue and time of the meeting. She also said that she had invited the Philipstown Board at a meeting earlier this month. “I believe this is the first time the County Legislature has met in western Putnam County,” she said. “I think that is very positive … and there will be time for public comment at the end of the meeting.”

While Oliverio said he had received numerous calls from residents concerned over the plan to start the meeting at 6 p.m., Albano indicated that neither he nor Scuccimarra had received any such calls.

When he originally denied the mayor’s request, Albano said that while the meeting would be open to the public, the main focus would be a discussion between village and county officials, suggesting that there was no need to accommodate a potentially large public audience.

Albano later told The Paper that there will be “… a lot of public comment once we know where we are headed. There are no secrets here.” He also said that it would “break his heart” if the meeting has to be canceled in the event that the turnout is so large that attendance exceeds Fire Marshall regulations.

Contacted by The Paper, Falloon said he was pleased with the change because it will allow more members of the public to attend. “It was a good compromise,” he said. As to the political wrangling it took to achieve it, he said that at times, “It’s more about politicians’ wants than the seniors’ needs.”

A major part of the Butterfield development is a proposed senior citizens’ center. Asked if he hopes Philipstown’s elected officials will also attend the meeting Falloon answered, “Absolutely.” He said he had not contacted Town officials on his own because it is Putnam County’s meeting.

It remains unclear whether or not Town of Philipstown elected officials have actually been invited to attend. In an email to The Paper on Sept. 17, Albano said that Succimarra had confirmed that afternoon that Town Board members would attend. Philipstown Supervisor Richard Shea said that he knew about the meeting because he had been copied on related correspondence and that he planned to attend — but that he was not aware of an invitation being issued to the Town Board.

He also said he didn’t know that the meeting had been shifted to the VFW — a move that he said would normally be approved by the Town Board, especially given the significance of the meeting. Fellow Board Member Dave Merandy, who has urged the county to adopt a broader dialogue as part of improved communications regarding Butterfield, was also unaware of an invitation having been sent to Philipstown elected officials.