Timeliness has acted as an assist for Jennifer Ciotta’s historical fiction novel I, Putin. The book, published in 2012, has hit its stride in sales more recently, as its subject has gained increased focus on the world’s stage. Ciotta, who has lived in Carmel for the past two years, will give a free reading and talk at Butterfield Library at 3 p.m. on Sunday, Sept. 21.

Sponsored by the Putnam Arts Council, her talk will address her motivations for writing the book and, in particular, how she connected to Vladimir Putin as a character; the book is written in first person, from his point of view. Ciotta expects that she will also delve into the contemporary issues surrounding Putin today, though she is careful to note that she is “not a foreign policy expert — this will be my take on what’s going on now and what I think may happen.”

Ciotta, who spent two years — from 2000 to 2002, in the Peace Corps in close-to-Russia Estonia, developed a keen interest in Russia when, soon after her arrival in Estonia, the Kursk submarine disaster, in which 118 sailors and officers were killed, occurred. Taking place around 100 days into Putin’s presidency, Ciotta initially followed what was transpiring through the eyes of Estonians, whom she notes, viewed Russia as occupiers, and still found the chain of events very sad. 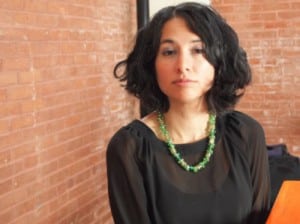 “As in Russia, people there were shocked at Putin’s perceived non-reaction to the tragedy — people were shocked to see photos of him jet-skiing at the time. This contrasted greatly with [then U.S. President] Clinton’s reaction to the Oklahoma bombing. The Russian people were enraged and the media pushed back against him. A typical newspaper headline said ‘Damn you — do something,’” Ciotta recounts, and it was then that she started to follow him closely, because she “realized he would be big someday” and she wondered what was making him tick.

Ciotta spent the ensuing years reading up on Putin and eventually completed a master’s degree at New York University, with Putin as her focus. Her studies culminated in I Putin and a thesis focusing on “Putin’s KGB mentality.”

In telling the story of this time, Ciotta decided to write I, Putin in the historical fiction vein because “parts of the story are fictionalized. Many elements of Putin’s life [as described in the book] are true: growing up in St. Petersburg, his split with his wife, how his daughters are kept very private, in the tradition of European leaders … I chose this genre because I wanted to dramatize parts of the story yet still keep close to the actual facts, so it wound up as sort of historical fiction meets alternate history.”

Ciotta says she tried to approach her personification of Putin “by looking at things from a non-Western point of view. The Western way is usually more black and white. If you look at television or books, you’ll find people embracing male protagonists who have good and evil sides. I tried to approach things from a Russian point of view, with more grey areas … For example, in the West [described frequently as the ‘feminist protest punk band’, two of whose members were imprisoned for nearly two years after protesting against Putin’s re-election] Pussy Riot are often made out as saints, but they have done some anti-Semitic things and some vulgar things in public. You can pick up a lot of nonfiction work about Putin, and in it he is always the bad guy, but I think Putin truly believes he is doing the best for Russia. For him, some of the leadership in the West is too fast and loose — he’s more controlled.”

Although Ciotta says she personally disagrees with some of Putin’s decisions, for example his anti-gay laws and international adoption retaliation policy as well as his tightened control of the media, she understands where they are coming from within his psychological make-up.

Changes in Russia … once more

As the book has now been out for two years, those years coinciding with so many changes in Russia under Putin, Ciotta has received constant reader feedback, and says that many have told her that they “understand Putin and that the things that have happened in the past two years make sense to them because of the book. The Kursk tragedy was the first time one saw the Putin we see today — you can see his motivation and his beliefs right there.” 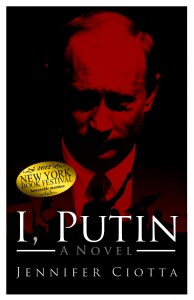 Asked how Russian readers have reacted, Ciotta says they either “love it or don’t like it at all. Alternate history is not as popular there so they don’t like the fact that he’s so fictionalized. And some say ‘this is all stuff I know already; this is the way we think of him anyway.’ But some Slavic readers really like it. One told me he thought that the way the book is written made it sound as if it was translated from Russian — it was that real.’”

Because of its extremely topical nature, I Putin has recently hit the Amazon Kindle Bestseller lists. “The book is selling better now, and mostly on Kindle, not in paperback,” Ciotta says. It recently topped Dr. Zhivago in the Historical Russian Fiction and Alternative History category, she notes with excitement. I Putin was Ciotta’s debut novel. She followed it with another book, in a very different vein, No Bulls**t Guide to Self-Publishing, which made the Amazon Kindle Top 100 Best Seller list in Education & Reference in April 2014.

She has just finished the first draft of her third, changing genres again. She describes her next effort as a young adult crossover, which she explains as being tailored to those 16 and up, including adults: “very dark, sexual novel centered around a teenage love triangle, based on a true story.” As “some people will be familiar with it” she is not naming those involved, as “it will blow the ending.”

Photos courtesy of the author