Hayworth campaign says she will close the gap

The Siena College Research Institute and Time Warner Cable News have issued results of a joint poll that places incumbent Rep. Sean Patrick Maloney 8 percentage points ahead of challenger (and former incumbent) Nan Hayworth in the race for the 18th Congressional District. According to the survey of likely voters Maloney leads bigger with Democrats than Hayworth does with Republicans, however, she has a 7-point lead with independents.

Maloney has an 11-point lead in Orange County where half the district voters live and much narrower 4- to 5-point leads in the remaining counties, including Putnam and parts of Dutchess and Westchester. 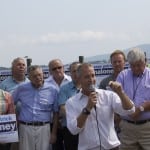 “This rematch that the political world’s been waiting for looks like it has the potential to be as hotly fought and closely decided as two years ago,” said Siena College pollster Steven Greenberg.

“Sean has the support of Republicans and Democrats because he’s worked across the aisle to get results for the Hudson Valley — creating jobs, investing in our infrastructure, growing our local economy, and cutting wait times for our veterans. Hudson Valley voters don’t want to go backwards to Congresswoman Nan Hayworth’s Tea Party record of privatizing Social Security, giving multimillionaires like herself huge tax breaks, and defunding Planned Parenthood,” said Stephanie Formas, spokeswoman for Maloney.

“This race is just getting started, and our first ad is airing today. Voters are ready to turn the page on the Obama/Maloney/Pelosi agenda, and once our message gets out there the race will tighten. When the full story is told, we’re confident that voters will choose doctor, mother, and neighbor Nan Hayworth to represent the Hudson Valley,” said O’Brien Murray, senior adviser to the Hayworth campaign. 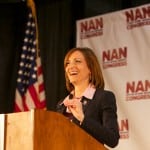 The poll also queried voters about views on issues and the results may cause the candidates to emphasize different aspects of their positions and records. Likely voters support a constitutional amendment for Congressional term limits (69-18 percent), increasing the federal minimum wage to $10.10 per hour (67-22 percent), passing legislation for comprehensive immigration reform (66-21 percent), and enacting the “Buffett Rule” — a minimum 30 percent income tax rate on millionaires (62-22 percent). By a 48-42 percent margin, they want the U.S. to do more politically and militarily in Syria and Iraq to combat terrorism.

“On immigration, health care, Mideast turmoil, and taxes, voters give only a slight edge to Maloney. On Social Security/Medicare and jobs — the most important issue for voters — they favor Maloney over Hayworth by 10-point margins,” Greenberg said.