Glynwood’s recipients of the 2014 Harvest Award are John Gill and Jean-Paul Courtens, for spearheading a pioneering farming partnership to establish sustainable agricultural production at the Hudson Valley Farm Hub. 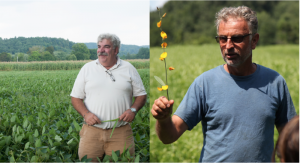 “Our food system here in the Hudson Valley is built on a network of relationships, and we are delighted to recognize one of these crucial relationships with this year’s Harvest Award,” said Kathleen Frith, Glynwood’s president. “We applaud John and Jean-Paul for inspiring farmers across the Hudson Valley to work together to move agriculture in the region forward.”

Now in its 12th year, Glynwood’s Harvest Award celebrates farmers, organizations and businesses that demonstrate innovation and leadership in sustainable agriculture and regional food systems. In the past three years, the award program has focused on exemplary agricultural enterprises in the Hudson Valley that align with Glynwood’s regional mission.

Gill is a third-generation farmer and the former owner of Gill Farms in Ulster County. The 1,255-acre property is now the site of the Hudson Valley Farm Hub, a major non-profit center for resilient agriculture being developed under the stewardship of the Local Economies Project. Gill now serves as the Farm Manager.

Courtens, originally from the Netherlands, is the founder and owner of Roxbury Farm, a 375-acre biodynamic farm in Kinderhook, New York, that has one of the largest community supported agriculture programs in the region. He is widely considered to be a pioneer in organic and biodynamic agriculture.