New York State Sen. Terry Gipson (D-Dutchess, Putnam) will hold his second annual Veterans & Families Fair on Saturday, Sept. 27. It will be held at the Ramada Inn on Route 9 in Fishkill from 9:30 a.m. to 12:30 p.m. The event will include an 11 a.m. ceremony honoring the 41st District’s 2014 Veterans Hall of Fame honorees. These outstanding individuals were nominated by their local veterans’ organizations for the work they do supporting their fellow veterans and community. In addition to the 41st District’s Veterans Hall of Fame, there will be a special recognition of all Korean War and Vietnam War veterans. 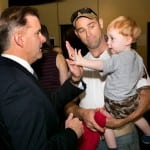 “After the success of last year, I’m proud to once again host this event that will help connect veterans and their families with important services in Dutchess and Putnam counties,” Gipson said.

The event will feature service providers and exhibitors that offer services such as health care, housing, employment, education, business support and much more, specifically for veterans and their families in Dutchess and Putnam Counties. It was made possible by the support of Central Hudson Gas and Electric Corporation, Health Quest, Hudson Valley Federal Credit Union and Bridgeway Federal Credit Union. An American Sign Language Interpreter will be provided during the ceremony portion of the program.

“As a member of the New York State Senate Veterans, Homeland Security and Military Affairs Committee,” Gipson said, “I hope so see all of our veterans and their families come out and get the support and recognition that they deserve.”