The Downing Film Center will present a special screening of the film Disruption Climate. Change. for the community. The film is not rated but is appropriate for the whole family. The film will be shown in conjunction with the Newburgh Last Saturdays’ Program and Newburgh Open Studios 2014.

“When it comes to climate change, why do we do so little when we know so much?”

Through a relentless investigation to find the answer, Disruption takes an unflinching look at the devastating consequences of inaction.

The exploration lays bare the terrifying science, shattered political process, and unrelenting industry special interests and civic stasis. The film goes behind-the-scenes of efforts to organize the largest climate rally in the history of the planet during the UN world climate summit.

The film enlarges the issue beyond climate impacts and makes a compelling call for bold action.

Disruption will be shown at 12:30 p.m. on Saturday, Sept. 27. Admission is free — donations welcomed for the Downing Film Center’s future programming. The screening will be followed by a short discussion. 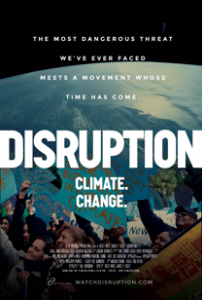