In a special benefit concert for The Bannerman Castle Trust, the Newburgh-based Just Off Broadway company presented a concert version of the Lerner and Loewe Scottish Highlands-set musical Brigadoon on Sunday (Sept. 21), with the Hudson Highlands  standing in perfectly for their counterpart in what is still the United Kingdom. Bagpiper Joseph C. Burns, who provided an atmospheric flavor to the show, was inspired by the ruins of Bannerman Castle, built by the Dundee-born Frank Bannerman, to come out and play after the show ended. 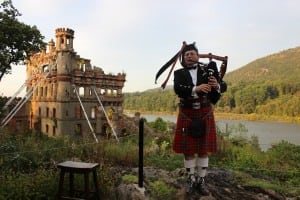