If someone were to tell you about a restaurant in your neighborhood where you can order a healthy, mostly organic, locally sourced meal at the cost of however little money you had in your wallet, you probably wouldn’t believe it. Or, you might search for the “small print” because, as the old saying goes, there’s no such thing as a free lunch. 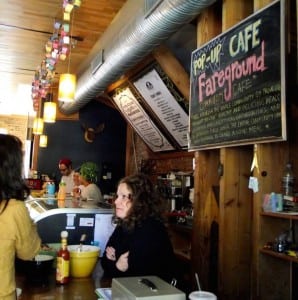 But Beacon now has such a pay-what-you-can deal, through the Fareground Community Café. And there is truth in Fareground Community Café’s advertising, but not without a few unique caveats. The first is that, if a customer cannot afford to pay for their meal in dollars, they sign-up to volunteer instead. Customers are encouraged to talk to their neighbors at family-style tables, especially if they are strangers. Third, if you have an extra $5 or $10, consider paying forward for another person’s food.

In true communal fashion, Fareground wishes to provide an upbeat, welcoming environment in which anyone can afford delicious home-cooked cuisine.

“Food is a great equalizer. It brings people together as a common bond,” said Margot Schulman, co-founder of Fareground. “It’s a small enough city that there should be a place where everyone can eat good food together. We want to foster connections that wouldn’t normally happen.”

After launching three years ago, Schulman and co-founder Kara M. Dean-Assael are closing in on their goal. Following a series of one-off events and a Kickstarter crowd-funding campaign last year, Fareground is now in the final stages of securing their own 501(c)(3) tax-exempt status. (Common Ground Farm has been their fiscal sponsor.) Given their reliance on a truly grassroots approach and a lot of pro bono assistance, Schulman says the process hasn’t always been easy.

“It’s tricky because the model is so new. We’re not a food pantry but we’re not a for-profit restaurant either,” explained Schulman, a professional natural foods chef, caterer and holistic health counselor. “As important as they are, the atmosphere at food pantries is depressing … . We’re not serving food that other people don’t want. We’re using the Hudson Valley’s wonderful bounty in our kitchen: fresh, local and organic when possible. It’s food that I would make for anybody.”

While continuing to fundraise and hunt for a permanent venue, Fareground is launching a monthly, full-menu “Sunday Pop-up” series at The Beacon Community Resource Center (BCRC), the first of which is this Sunday, Sept. 28, from noon to 3 p.m.

Co-founder and chef Margot Schulman cooks everything for Fareground in her kitchen at home. (Photo by Sommer Hixson)

Lunch includes a main course of baked spaghetti, salad, fresh bread and dessert, with gluten-free options. The meat is local and grass-fed; the produce is from Obercreek and Fishkill Farms. Tas Kafé is providing complimentary coffee and Five Hens and The Darling Kitchen are baking cookies. Beginning in October, a second, additional location in Beacon will be added to Fareground’s pop-up schedule. BCRC lunches will always be held on the last Sunday of each month.

Fareground is part of a growing family of community cafés in the United States, the closest of which is Jon Bon Jovi’s Soul Kitchen in Red Bank, New Jersey. The One World Café in Salt Lake City, founded in 2003, is credited for starting the national pay-what-you-can movement. Denver, Colorado, has the most non-profit restaurants in one city (three), including SAME Café, which opened in 2006.

Because there are no set prices and the menu frequently changes, communication at Fareground Community Café is key to helping people navigate the experience, which might be new to some customers and possibly awkward. Signs and table tents will explain how the system works. Importantly, there is a trained greeter on site to talk to anyone with questions and to serve as a mediator for work exchanges.

“It’s not a free meal. It’s more about recognizing there are lots of different ways to pay for something,” said Schulman. “It’s also about respecting the fact that most people don’t want a handout. They want to be able to give something back and be appreciated for what they do have.”