A memory of Esther and Philip Baumgarten and The Hudson Peddler

“When you get to Garrison, stand up.” I’ve heard these words more times than I can count. I’ve heard them so many times that they are embedded in my mind like a computer program and just pop into my head any time I’ve headed to Cold Spring from New York City, where I’ve lived now for over a dozen years.

My great-aunt and great-uncle, Esther and Philip Baumgarten, lived at One Market Street in Cold Spring, for 32 years. For over 20 of those years, they ran a store called The Hudson Peddler. They lived above the store and had a few tenants and even a local B&B in their building. Someone might come into the store a few times and before you knew it, they’d be upstairs having coffee with Essie and Phil.

My memories of Cold Spring are like flipping through a photo album. As a girl traveling from Chesterfield, Virginia, with my sister and parents for Thanksgiving, after quick hugs and hellos, I’d rush from their attic apartment down to The Hudson Peddler to pull red candy fish out of a jar, or plough down the cold street with my coat open to “scoop the loop” at the river. As a teenager, I’d walk into town with family and friends to pick up Chinese food the day after Thanksgiving.

We gathered as a large group once a year for Thanksgiving — and many times a Cold Spring Thanksgiving — relatives arriving from Montreal and New Mexico, from Florida and Virginia, from upstate New York, Connecticut and California. The different generations would stroll or amble or bulldoze across the street to the Hudson House and we’d leave hours later, beyond satisfied with food, drinks, dessert and discussion.

We’d return to One Market Street for heated family debates, campaigning to win each other’s votes about which movie we’d go see together, and Aunt Essie and my grandmother would declare yearly that they’d walk on the ice in crutches for Thanksgiving, just in case anyone was considering not coming the next year….

As a college student on break, I brought my boyfriend to stay with me in Essie and Phil’s extra apartment and we signed their guest book and couldn’t believe we got to have our own space! A few years later, newly single and looking for a new adventure, in the summer of 2000, I moved from Chesterfield, Virginia, to New York to pursue playwriting — with no job and no friends and no idea what I’d do. 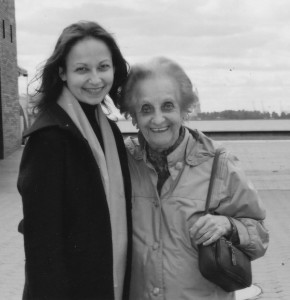 I moved into Essie and Phil’s apartment, the one that used to be a B&B. As I pulled up to One Market Street in my parents’ hand-me-down Honda, Essie and Phil’s garden was in full bloom and Essie greeted me from the top of the stairs: “Why do you have so much stuff?”

Those were wonderful and lonely weeks — wishing that the dreary wallpaper would whisper what I should do and blessed to have family a few floors above. Before long, I was in New York City in the same apartment I’m in now.

And as soon as I moved, the mantra began: “When you get to Garrison, stand up.” Even though Garrison was a full five minutes on the train before getting to Cold Spring, Essie and Phil wanted to make sure “you don’t end up in Poughkeepsie.” They also wanted to make sure when you headed back home to the city, that you gave yourself at least 20 minutes to walk across the street.

I wish I had asked Phil more questions about his life during those months I lived with him in 2000. Three years later, he died with his family lovingly gathered around him. It seemed that the entire town gathered to honor this kind, gentle man. I remember sitting in my apartment in New York City after he died, looking out my window at the budding magnolia tree while snow slowly swept down on the branches.

During these years while I’ve lived in New York, I’ve had lots of good things happen around my playwriting life — national and international productions and publications. Essie always came to the city to see everything she could, and she kept every publication on her bookshelf. She also said in recent years, “Wouldn’t it be nice if you had your work done at the Depot in Garrison?”

She died three years ago. Her death hit me harder than any other family member who had passed, not because I loved them less but because I knew her more. And the town came out once again to sing, laugh and cry and honor my funny, no-nonsense great-aunt Esther Baumgarten.

A nod to Essie and Phil

A few months ago, someone who knew Essie and Phil well sent me a notice that the Aery Theatre Company was taking submissions of one-act plays at the Depot in Garrison. I submitted my play A Visit to the Bronx — which is inspired by my grandmother, Gertrude Schmilowitz, who was born in the Bronx; it also has a nod or two to Essie and Phil. It was chosen for a production. And, so, soon I will be standing up in Garrison, to cross the tracks to the Depot and present A Visit to the Bronx. I will stand up at Garrison but my heart will be a stop away in Cold Spring, knowing Essie would be so pleased about this production.

You can see A Visit to the Bronx on Sunday, Oct. 5, at 6 p.m. at the Depot Theatre, along with other one-act plays entered in the competition. If it progresses, you might be able to see it sometime the following weekend, Oct. 11 and 12 as well. You can find full details about the festival at philipstowndepottheatre.org.

Sharon E. Cooper is an internationally produced and published playwright and a screenwriter. She’s currently working on her second full-length screenplay. Learn more at sharonecooper.com or contact her by email at [email protected].

4 thoughts on ““When You Get to Garrison, Stand Up””