Haldane has trifecta of homecoming winners

Haldane football played the first-ever home game under the lights against Pawling on Friday (Sept. 26), taming the Tigers 33-6. The energy of the crowd, which filled the stands and lined the fence from one end to the top of the ramp, perhaps could have powered the rented lights as effectively as the generators. Certainly, according to coach Ryan McConville, the team fed off the crowd’s excitement and spirit. 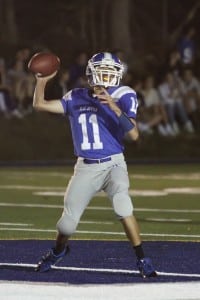 Freshman quarterback Brandon Twoguns sets up for a pass at the Haldane-Pawling Homecoming under the Lights game on Sept. 26.

In the only disappointing moment of the evening, quarterback Tyler Giachinta left the field with a hand injury but returned from the ER amidst applause as the final play of the game was being called. Giachinta will start for the next away game on Thursday (Oct. 2), against Blind Brook.

With little varsity game time, backup quarterback freshman Brandon Twoguns stepped in “with poise and confidence,” Coach McConville said, “taking control of the offense for an amazing job for the rest of the game.” Twoguns went seven for 10 for 134 yards and one touchdown.

Giachinta rushed for one touchdown before his injury early in the first quarter. Running back Matt Balducci and the offensive line dominated the line of scrimmage, controlling the tempo of the game. Balducci had 25 carries for 208 yards with three touchdowns.

First out on the turf for Homecoming, boys’ varsity soccer began the takedown of the Pawling Tigers. Ending in a 5-0 victory, goals were scored by Jason Zielinski, Miguel Toribio, Seth Warren, Ramsey Heitmann and Peter Hoffmann. 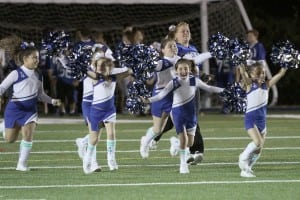 The Philipstown Hawks Cheer Squad takes the field during halftime at the Haldane Homecoming game on Sept. 26.

Meanwhile, in the gymnasium that proudly announces them as the 2013 New York State Champions, the varsity volleyball Blue Devils smacked down undefeated Spackenkill in three sets (25-22, 25-12, 25-16).

Completing the trifecta of afternoon Homecoming winners, girls’ tennis was victorious to top the league. After dropping the first match in one close doubles match by Lucinda Stroll and Jayme Fox (4-6, 3-6), Alii Sharpley and Lian Petrie battled back after losing their first set (2-6), to win the second (6-4), dominating the 10-point tiebreaker. Coach Simon Dudar was proud of the leadership shown by senior Petrie, and the growth by Sharpley who worked her way into the starting lineup this week.

In singles play, Olivia Sterling lost 4-6, 4-6 in a very tough match of repeated rallies lasting 10 to 20 shots each.

Cross Country held its own in the Bowdoin Classic against tough competition from several of the best teams from Connecticut and New Jersey.

“The girls continue to get better and better even when they are not at full strength,” Coach Tom Locascio said. The team was missing two of their top five runners due to injury and sickness. “If the girls keep improving, I expect a very strong showing at the state championships in November.”

“I have never seen a lead pack that big so far into the race,” Coach Locascio noted. “At mile one, there was still a pack of 50 boys running shoulder to shoulder. Our goal is to compete outside our school size and we are just doing that at this point. Injuries have played a major role in our somewhat slow start.” Theo Henderson and David Rotando are both recovering from injuries.