History has repeated itself. As it has since the late 1800s, the handsome brick building at the corner of Main Street and Stone Street in Cold Spring is back in business as a bar. Doug’s Pretty Good Pub opened on Friday, Sept. 26, and enjoyed what owner Doug Price described as “a successful first weekend.”

A Cold Spring resident, Price grew up in Dalton, Massachusetts. He got his start in “the business” at age 16, cleaning the bar at The Edmar Cafe as an after school job. The bar’s owner, Joseph “The Red” Carlo, “…was pretty cool, pretty funny,” Price recalls with fondness. “He use to say things like ‘I have ‘arth’ on the ‘ritis’ causing ‘riga’ on the ‘mortis’ … or ‘I’ve got one foot in the grave and one foot on a banana peel.”

Another of his early jobs was in the bar at a public golf course, where owner Al Basiliere had a habit of calling everyone “John” — even his wife. “A new customer would come into the bar and Al would say ‘Hi John, how are you doing,’” Price said. “The guy would say ‘My name is Peter’ and Al would respond, ‘Yeah whatever John.’ He just couldn’t remember names.” 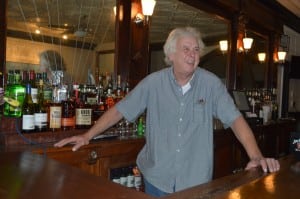 Owner Doug Price wants his pub to be a place where people ”can enjoy some good food … and have good conversation.”

Someone who gives his age only as “old enough to know better,” Price’s early exposure to the lighter side of the bar business is evident in the mood he wants his pub to embody. And it certainly influenced his choice for its name. “I just wanted to add a little levity, a little humor, to show that it’s a place where you can have a good time,” Price said. “And besides — when you’re ‘pretty good’ you always want to be even better.”

Price has operated and/or owned restaurants and bars in Boston, Los Angeles and Manhattan. In the 1990s he owned The Stock & Tankard and then The East Side Ale House in New York City. Currently, he also sells computer systems to restaurants and bars.

Asked why he got back into owning a bar, Price said, “I’ve been in the business pretty much all my life. I wanted to create a place, and an atmosphere, where people can come and rub elbows and talk to each other after a day’s work.” The historic bar’s new look reflects that customer-friendly philosophy, including a series of beer-garden style tables that can accommodate six to eight patrons. “People who don’t know each other, can share a table and get acquainted,” he said.

The menu will have some familiar fare, but often with a twist. There will be burgers, served on an English muffin. Price describes the pub’s signature hot dog as “just a little different.” Up until now the newest “dog” in town could only be found in Western Massachusetts. “We’ll also have charcuterie, salads and sandwiches,” he said. Noticeably absent will be fried foods such as chicken wings and French fries. Beverages will include a rotating series of craft beers, and a selection of red and white wines, along with mainstay bottled beers and mixed drinks. 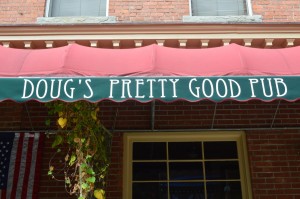 Cold Spring’s historic pub is back in business under new ownership and with a new name.

Fifty-Four Main Street has a rich history as a pub. Until last June it was known as McGuires-on-Main. For some Cold Springers it will always be remembered as The Downtown, McGuire’s predecessor. Even further back it was called The Mug and the Mermaid and for many years prior to that, simply McConville’s. Pressed-tin ceilings are common in many old bars, but this is one of the few that also boasts pressed tin walls.

But for Price, “It’s the bar,” that is most distinctive. The stately, solid wooden structure was built by the F. & M. Schaefer Brewing Company, which, early in the 20th century, often provided a bar to owners in exchange for guaranteed sale of its products. Price feels that the old pub feel makes 54 Main Street “a little more quaint” than other local bars. Minor structural repairs were made, the exterior painted and the interior given a fresh new look before Price moved in.

While many pubs today suffer from television-mania, with screens visible from every possible vantage point, Doug’s Pretty Good Pub will feature only two TVs, to be used during live sporting events. He doesn’t see his new establishment appealing to a specific age group but does think both local residents and visitors will appreciate it.

“I want it to be an alternative, a corner bar where people can be comfortable,” he said, “where they can sit and enjoy some good food, with a good bartender and enjoy good conversation.” Last Friday’s opening night was busy and it was a distinctively 30-plus crowd. Price said the pub will avoid “the frat-boy mentality” of “doing shots and carrying on like kids.”

As the owner of a pub that is only about 50 miles north of Yankee Stadium, Price may be as unique as the building in which his bar is located. He’s a Boston Red Sox fan. “I tended bar in Brooklyn for years and survived,” he laughed. “And now you see more Boston ball caps than ever in New York. And besides … I kinda like the Yankees.”