Meteorologists rarely, if ever, refer to rain as a good thing. That may be because the weather gurus haven’t spoken to Greg Phillips recently. In his report at the Village Board in early September, Phillips, Cold Spring’s Superintendent of Water and Waste Water, asked residents to voluntarily begin conservation measures in order to reduce the amount of water being used in area homes and businesses. His concern was due to low water levels in village reservoirs — and predictions of continued dry weather into the fall season. Those predictions have held true, and water levels at the reservoirs continue to drop. 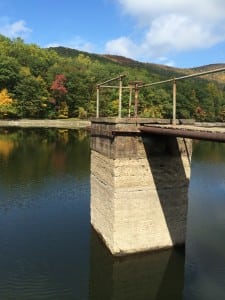 This shot of the valve housing at the Upper Reservoir clearly illustrates the normal water level — the bottom of the darker portion of the concrete column. The current water level is 5 and one half feet below that. (Photo courtesy of Greg Phillips)

Cold Spring’s water supply comes from three reservoirs located more than two miles above the village. The system is gravity fed, with water flowing down from the upper and lower reservoirs on Lake Surprise Road to the Foundry Brook reservoir at the water treatment facility on Fishkill Road. After being treated, water is piped underground to Nelsonville and Cold Spring. Surplus surface water follows Foundry Brook down through the villages and the West Point Foundry Preserve before emptying into the Hudson River.

The problem has simply been a lack of rainfall, though Phillips hopes that will change soon. “If this were July instead of October, I would recommend mandatory measures now,” he said. “Typically, we should be getting some precipitation in the coming weeks.”

Phillips said the village digital rain gauge indicates that from June through September Cold Spring received 12.69 inches of rain. The average for that period from 2011 to 2013 was 19.08 inches – with a peak of almost 21 inches. “We’re … 33.5 percent off the mark for precipitation,” he said.

Going into summer the situation was good, but Phillips said that changed dramatically. “We started the summer better than in the recent past,” he said. “Water was flowing over the spillways through July. But August slowed dramatically and September hit the brakes,” in terms of rainfall.

Ironically, Cold Spring will be lowering water levels in the upper and lower reservoirs to make repairs needed to the dams, although it won’t be happening any time soon according to Phillips. The village is awaiting approval from the New York City Department of Environmental Protection to tap into the Catskill Aqueduct for its water supply while the reservoir repairs are being made. The underground aqueduct passes by Cold Spring just above the intersection of Fishkill Road and Route 301. 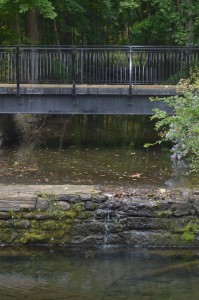 With little rainfall in August and September, Foundry Brook is a mere trickle at the West Point Foundry Preserve. (Photo by M. Turton)

There has been a silver lining to the current low water levels. They have helped officials better assess the dams and the needed repairs. “The low levels in the upper reservoir have allowed more detailed inspection by our consulting engineer,” Phillips said. It seems that the majority of seepage through the dam — which creates the need for repairs — is occurring at the top two feet of the dams. Phillips also said that seepage has been “dramatically” less since reservoir water levels have dropped.

The millions of gallons held in Cold Spring’s reservoirs may seem like a limitless water supply but a quick look at major consumers says otherwise. Between April and June of this year, the Haldane schools, the single largest consumer of water, used 229,100 gallons while the Hudson House was the next largest user at 187,000 gallons.

Phillips believes that conserving water is always a good practice. “If we incorporate it into our daily routine…our children will carry it forward,” he said. He has practical suggestions for such a routine including: don’t run water while brushing your teeth; keep a container near each faucet and when waiting for hot water, fill it for watering plants and other uses; if you must wash a vehicle, use a pressure washer which uses less water — or go to a commercial car wash — they recycle water; and lastly, do only full loads when washing clothes.

AccuWeather.com indicates only one day of heavy rain in October as part of its extended forecast for Cold Spring.