Unanimously authorizing acquisition of a new tanker-pumper truck for the Garrison Volunteer Fire Company, the Philipstown Town Board Thursday night (Oct. 2) ended six months of contention spawned not by the truck per se but the way its purchase unfolded, with town officials claiming they remained in the dark far too long.

At their formal monthly meeting in Town Hall, while approving the truck plans — specifically, allowing financing of the vehicle — Town Board members chastised the GVFC for its handling of the affair. In February, after it had already decided to buy the pumper-tanker, prepared and disseminated a 53-page request for proposals on the vehicle, found a suitable seller, and settled on a price of nearly $309,000, the GFVC sent the Town Board a memo announcing its actions. 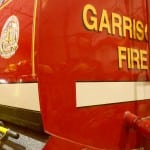 Town Board members objected, maintaining that the GVFC must involve the board from the beginning, not merely inform it after concluding agreements. Before ratifying the GVFC move, the board also sought updates on the state of the GVFC’s treasury — data eventually provided. As Town Board members noted on Thursday, the GVFC’s contract with Philipstown requires it to alert the Town Board in advance and discuss with it any prospective new purchase exceeding $5,000; follow procurement rules; and apprise the Town Board before selling obsolete equipment worth more than $1,000.

“We have an agreement that you guys come to us before any of these purchases are made,” Councilor Nancy Montgomery told GVFC representatives. She recalled that the board has made the point before, in regard to other GVFC expenditures. “I hope that in the future we can repair this unfortunate relationship” and communications breakdown “that seems to keep recurring,” she said. “I don’t know; I feel duped.”

“It’s aggravating. It just is,” Shea said. “We would strongly advise that in the future the fire department adhere to the contract.”

“We shouldn’t be having this discussion,” Councilor Michael Leonard added. “It really has nothing to do with the tanker. That’s not the issue. It’s about a problem that continually goes on.”

Shea acknowledged that “the fire company needs reliable equipment” and that the GVFC “is well within its rights to sign contracts. But that doesn’t commit the public to financing those contracts” (involving forms of debt) and the fire company must collaborate with the Town Board, which “vets the whole thing,” Shea said.

Councilor John Van Tassel said he had supported the acquisition of a new pumper-tanker five years ago. “There needs to be water at a fire. And it needs to be a dependable strong truck to make sure it’s there,” he said. However, he said that he had also recently spoken to the GVFC president privately, in light of the lengthy stalemate this year. “I wish you good luck with the truck,” he said, declining to comment further, given the protracted debate already.

According to paperwork provided the Town Board, under terms reached with a financier, All American Investment Group LLC, for a lease-purchase deal, the truck will cost $308,627, with a down payment of $80,000 and $228,627 being financed, at an interest rate of 2.76 percent.

For the days ahead, Shea signaled pending changes to GVFC financial accounting. “We’re going to get a different budget format going this year,” he said. “We’re also going to be looking at a financial report” covering everything to date, “so we’ll have a complete picture of where the Garrison fire company is currently, when we go into this new budget.” The Town Board is now developing the 2015 budget, which covers all town government functions.

Rodney Tudor, who has served the GVFC as chief and in other capacities, responded to the complaints at the Thursday meeting. “In no way were we ever trying to deceive you,” he assured the board. “I thought that” February memo “was enough. We never tried to hide anything.”

Later that evening, the Town Board set workshops for Oct. 8 and Oct. 15 for 2015 town budget preparation and reviews of various municipal needs.