The two candidates used thrust and parry techniques through 90 minutes of answers to questions and opportunities for rebuttal before an audience of approximately 150 people, most of whom clearly supported one candidate or the other.

Middletown is a 45-minute drive west from Philipstown where Maloney lives and even farther for Hayworth, who lives in lower Westchester County, which illustrates the physical size of the 18th Congressional District. About half the district’s eligible voters live in Orange County.

Right from their opening statements both candidates sought to stake out basic positions and demonstrate the contrast with their opponent. As befits contemporary political discourse the candidates displayed a rehearsed rhetorical discipline and a resolute commitment to key message points regardless of the question asked. 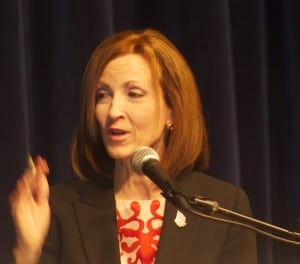 “You know me, I’m Nan Hayworth, I’m a mom, I’m a doctor, I’m your neighbor and I am someone who cares deeply about our Hudson Valley and the direction we’re headed in the Hudson Valley and our nation … we have a representative in Congress who believes in the Washington agenda. He supports Nancy Pelosi’s (House Minority Leader and former Speaker of the House) return to the Speaker’s position,” declared Hayworth in her opening statement.

She listed the Affordable Care Act, the Dodd-Frank financial regulation law, and the charge that energy prices are higher due to a lack of domestic exploration for energy as causing federally imposed programs and Maloney-supported burdens on the local economy and the opportunities for growth and jobs. She would return to this litany often.

“It has been the honor of my life to serve you in Washington. I am proud to be back tonight with a record of results … 13 bipartisan bills passed by the House of Representatives, thousands of constituent cases handled by my office, dozens of disaster relief project sites in motion,” Maloney said. The congressman referred to his own father, Jim, a disabled veteran of World War II who went on to support a family of five children, as a symbol of his goals and approach to issues. “I want to be the kind of congressman who fights for guys like Jim Maloney… I want to fight for middle-class families throughout the Hudson Valley.”

The debate included about a dozen issue categories with thoughtful questions both national and regional import prepared and asked by Dr. Lawrence T. Force, a professor of psychology at Mount Saint Mary College in Newburgh. Notably absent were any questions regarding national and global security and the military situation in Iraq, Syria or Afghanistan. 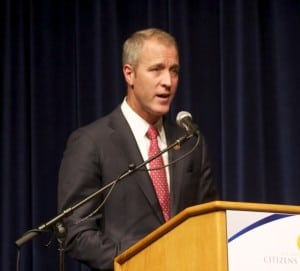 Throughout Maloney made it clear that he believed in the federal government’s role to financially support education, health care and infrastructure upgrades as well as be a partner in job creation through tax incentives, loans and grants. He also took pains to underscore his rating as one of the more independent members of Congress, seemingly eager to separate himself where needed from the policies of the incumbent president.

As he always does, he labeled himself “a Clinton Democrat,” emphasizing his service in Bill Clinton’s White House. He asserted that the federal budget could be balanced and the national debt paid down in the same way it was done in the Clinton era. He said often there should be no tax breaks for multi-millionaires. “The difference between a Tea Party Republican and a Clinton Democrat like me is that I think there is a role government can play,” Maloney said.

Consistent with her conservative beliefs Hayworth repeatedly said that local solutions to problems were often a better approach and that Washington should get out of the way bureaucratically and also return more taxpayer dollars to local communities for things like education and infrastructure. She said the tax code needed an overhaul and small businesses needed relief from the costs of taxes, regulation and health insurance.

“It is wrong for the federal government to take billions of taxpayer dollars and then impose one-size-fits-all solutions on hardworking people,” said Hayworth, responding to a question on the imposition of Common Core educational standards.

The debate format might have benefitted from having follow-up questions from the moderator or maybe even the candidates themselves. The candidates sometimes answered other questions rather than the one asked or provided viewpoints without addressing specific consequences or outcomes. For example Maloney could have been asked if he thought balancing the federal budget Clinton-style would include raising taxes across the board as it did in the Clinton administration. Or when Hayworth said often that it was important to have resources for schools or highway or the environment dispensed locally, through what mechanisms would that happen if federal taxes were reduced?

Immigration reform appeared to be one area where the candidates more or less agreed. Asked about the Senate bipartisan compromise bill, which the House never took up, both said they saw merit in the approach. The legislation includes a 13-year path to citizenship, a more secure border between the U.S. and Mexico and greater workplace verification of legal status.

Health care was an area of strong disagreement. Hayworth asserted that as a doctor she understood what people needed for health and it was not the Affordable Care Act, which she said needed to be dismantled. She described it as “a trillion dollar gift to the bureaucrats and the insurance companies.” Maintaining the private insurance role in the federal program was a large Republican issue when the bill was first debated. Hayworth did not suggest a new program approach or what would happen to the more than 7 million people currently enrolled, if the current program ended.

Maloney agreed the program was poorly rolled out and distanced himself from some aspects, such as the medical device tax he voted for. He said he supported a delay in the individual mandate that matched the president’s grant of a business mandate delay. But he defended central health-care reform provisions including ending the use of pre-existing conditions to deny coverage and inclusion of children over the age of 21 on family policies. He also cited savings in the Medicare trust fund as a result of the reforms.

Both candidates agreed that bipartisan approaches to governing were the key to finding national solutions but bitterly disagreed over their track records in pursuit of it.

The entire debate can be seen on the Orange County Citizens Foundation website.

One thought on “Maloney and Hayworth in Tense Debate”