RiverWinds Gallery presents Transcendental — new oil paintings by Kevin Cook, whose style is strongly influenced by Hudson River School artists of the 19th century. Cook bears his own fresh contemporary sensibility and a recent loss in his life has brought new emotion to his paintings. The opening reception is from 5 to 8 p.m. on Oct. 11, Beacon Second Saturday. The show runs through Nov. 2.

Cook poured his soul into his paintings. The pieces are a little different, emotional, stirred up, rainy. 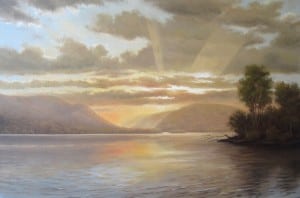 Cook attended the State University of New York at New Paltz, gaining a B.S. in art education and is a guest educator at the Samuel Dorsky Museum in New Paltz.

It was there that he discovered the work of the Hudson River School, and that of English Romanticist John Constable. While employed at Mohonk Mountain House, a Victorian resort in New Paltz, his vision of nature and romanticism matured to its present state. Mohonk’s storied past and the surrounding Shawangunk Mountains’ rugged terrain inspired him and he gradually developed his style of painting as a means of communicating his spiritual connection to this landscape.