Chapel of Inadvertent Joy author to read at Chapel Restoration

For some poets, reading their work aloud, to an audience, is torturous. Not so for Jeff McDaniel, author of five published collections, and professor of poetry at Sarah Lawrence College.

McDaniel thrives on that electric aural connection between spoken language and audience. Long before the touring now part and parcel of promoting literary works, McDaniel was on the lookout for ways to bring words to the people — not in hushed literary circles, but in the sparkplug-y early days of what has become known as the spoken word movement. 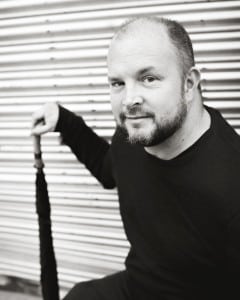 This Sunday, Oct. 12, at 4 p.m., McDaniel, a Cold Spring resident for the past eight years, brings his visceral, energetic performance vocabulary to the Chapel Restoration, returning for the third time to the Sunset Reading Series for a free reading. Also on tap is a solo set from guitarist and singer Richard Baluyut, formerly of the band Versus.

McDaniel and Baluyut knew each other in college — “We hung out at Mad Fish, played football; I saw his bands play in the late ‘80s — it’s cool for me to do something with someone I’ve known for 25 years,” McDaniel says. While the recitation of poetry and the playing of music in the afternoon in a former chapel may sound like a genteel diversion, the program promises to be anything but that.

McDaniel, from Philadelphia, found the poetic form around age 14, though he calls it “not a conscious choice.” He recalls heading into his bedroom at around that age and penning a poem called The Rollercoaster of Life about which he says, “I realized it was bad by the time I was in college.”

Although McDaniel wrote a great deal in high school, he had no models to work off of, as “it wasn’t a very visible form” for someone his age at that time. In a harbinger of what came about later in life, with “a desire to share, from the beginning” McDaniel remembers performing an eight-minute-long mix-up of mime, poetry and dance, clad in leather pants, in high school. “It was hard to contextualize and a little mysterious, too,” he recalls. “At that time I would show my poems to girls and ask them to “give me four words and I’ll write a poem kind of thing, but they were bad, rhyming poems.”

McDaniel says that although he enjoys reading from his work, he never has and still does not write ‘for’ someone — at least not consciously. “After you finish it, you consider what other people might think of it, but not until that point,” he says. “I do read them aloud, usually early in the process, to a friend, sometimes to my wife, but most importantly, feeling it in my throat to gauge my reaction. Usually by the time I’m reading it in front of people, the ship has left the harbor, but I do make discoveries then, about what things people like or react to; sometimes I’m very surprised by what is elicited.”

McDaniel headed to Sarah Lawrence for his undergraduate degree. “I don’t think it was clear what would become of me,” he recalls. “I was always serious about poetry, but if you polled my teachers I’m sure they would not have said that ‘Jeff is going to be the one who will come back and teach.’” He continued his studies, receiving an MFA from George Mason University, working with C.K. Williams, Susan Tichy, and Carolyn Forché, but really influenced, “by my peers — they were crucial to my evolution as a writer.” By the end of his time at George Mason, McDaniel’s submissions began to be accepted for publishing, in prominent publications like Ploughshares.

With the poetry slam movement gaining traction just as McDaniel was winding down his student days, he found a foothold in that new form, representing Washington, D.C., at several National Poetry Slams. While beginning to do a lot of touring, he also worked for DC WritersCorps, a ‘poetry in the community’ project, outreaching into underserved communities.

He also hosted a monthly reading series in D.C., and performed a one-man show, which combined poetry, video, dance and music at the Washington Project for the Arts, all while continuing at the main business at hand: writing poems. His first three books, Alibi School (1995), The Forgiveness Parade (1998), and The Splinter Factory (2002) were published. “It was a neat experience to go from a graduate program where writing was intellectualized to taking it to more of a ‘doing poetry with people without college degrees type of community activity,” he notes.

In the mid-‘90s McDaniel headed west, relocating to Los Angeles, curating events at a literary arts center and teaching at extension programs. Then, somewhat out of the blue, Sarah Lawrence came a-calling, offering him what was initially a one-semester hire, and eventually a full-time, tenured position. Returning back east, this time to Brooklyn, McDaniel spent seven years there before heading up the Hudson to Cold Spring, after driving through the area en route to a wedding taking place in the Catskills. It was a move he calls “a leap of faith, but the natural beauty was not like any other place I’d been before.”

For the past few years, McDaniel has conducted multi-session community-based ‘Writers’ Workshops’ and has worked with Haldane high school students on a number of projects, giving him a greater connection to this area. “Between the people in the workshops, the stimulating work with the kids, going to high school basketball games, even, and going through the grief of people passing away, these things connect you, and I’ve been constantly surprised at the number of interesting people here — people who have lived here a long time as well as the new people; so many are multi-faceted.”

McDaniel says his time spent in the Hudson Valley has definitely affected his writing. “I lived in cities my whole life before this. I have a poem in my latest book about doing yard work, and another about running over a raccoon — two things I’d never experienced before!”

That latest book, which McDaniel will likely read from on Sunday, is called Chapel of Inadvertent Joy. Divided into three sections, the first consists of persona poems, not set in any particular location while the second is the ‘voice’ of one character throughout and the third is the “most personal, more autobiographical part — the last section feels closer to me, my voice.” Currently, McDaniel is trying other forms, including a recently-completed “memoirish novel” which he has worked on for about 15 years. He may read from this as well.

The world of connectedness now found through the ways and means of online sharing and documentation has altered the realm of the poet in ways McDaniel could never have predicted. Some of his poems, anthologized or otherwise accessible, have found their way to a new population. McDaniel cites, as an example, what he calls his most popular poem, The Quiet World, and how that popularity, among high school students, has translated into videos being made to accompany his words, and shared on YouTube. “If I think back,” he muses, “my 15-year-old dreams are a little abstract. I probably wanted to be Jim Morrison or David Bowie, something like that, but had I known that there are people who have ‘found’ my work — I feel very fortunate for that.”

The reading, which is free, will be followed by a wine and cheese reception. Free parking is available at the adjacent Cold Spring Metro-North lot.