Dirt roads snaked back onto the agenda Oct. 2 at the Philipstown Town Board’s formal monthly meeting, where the board voted 4-0 to pave a dirt stretch of East Mountain Road South, thus linking two already-paved sections, and derailed immediate removal of signage on Old Albany Post Road.

According to the board, 12 of 14 residents of the unpaved section of East Mountain Road South want it paved. Shea said the unpaved stretch is about 3,000 feet, in an area baked by the sun.

“It’s like talcum powder up there,” he said. “There’s just dust hanging in the air up there, persistently.” While most wanted paving, on the part of a few others, “there are concerns about paving. I understand that,” and at a town meeting in September “there were a lot of heartfelt opinions on both sides,” he said. “But it’s something that needs to be addressed.” 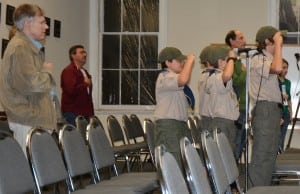 “Some of these roads get to the point where the condition affects the safety and welfare of the people that live on them,” Montgomery said. “I think it’s in the best interests of the community and people on that road to pave it.”

“The life-safety issue, for me, is the biggest point,” Councilor John Van Tassel concurred.

Councilor Michael Leonard spoke in a like manner and also pointed to the pro-paving sentiments of most residents. “I think our society is based on majority rule,” he said.

Shea noted that in upkeep of a dirt road, “it’s not just dirt. It’s a composite of things” required, including hardeners, gravel, grading, and dust-control chemical applications, which “doesn’t work all that well in a year like this because it does need a little bit of water in order to activate it. And we weren’t getting that water” from rain, he said.

Philipstown Highway Department crews “were up there with the truck, spraying down enviro-brine and spraying water. But it becomes sort of a full-time job on a road like that.” The crews used 200 gallons of brine weekly, “on that one little stretch of road,” spending $180 a week, Shea observed. “And it was not effective.”

He also highlighted environmental costs, since often the road surface “goes into the stream” and disappears. Likewise, ferrying dirt-road materials long distances from suppliers increases wear-and-tear on town trucks and, in “burning diesel fuel,” on the environment, he said. Shea cautioned that “paving a road isn’t cheap, either. But once you do it, the maintenance costs drop dramatically.”

Coincidentally, the monthly written report to the board from Philipstown Highway Department Superintendent Roger Chirico referred to dust-mitigation costs. “The department has only one water truck, so we are asking residents to please be patient,” Chirico wrote. Given the summer’s dryness, the department rented a second water truck “to keep up with the demand,” at a cost of about $6,200, Chirico stated. “This is one of the routine maintenance [tasks] that comes with dirt roads. We have about 35 miles of dirt roads to cover and it takes time.”

After the vote on paving, East Mountain Road South residents thanked the board.

Terry Zaleski, president of the Old Road Society, a group advocating preservation of dirt roads, likewise praised the board’s careful consideration of the situation and input from residents. “People who spoke up have had their voices heard” and members of his group “respect the process as it occurs here tonight,” he said. Zaleski also advised that contrary to assumptions, drainage work along dirt roads “is not necessarily preliminary to paving.”

Similarly, paving East Mountain Road South “does not mean the board is leaning toward paving other roads,” Shea said. “I know there’s a lot of suspicion out there, and that’s unfounded. It [paving] is not something we do lightly.”

Although still differing with some arguments for the East Mountain Road South paving, resident Robert Juby told the board that “I can’t help but support it.” He also sought to reassure those who doubt the town’s ability to properly handle a rural-road issue. “We can make it work,” Juby said, mentioning a successful drainage upgrade near his home as an example.

The board postponed a vote on removing signs on Old Albany Post Road warning, “Local Traffic Only.” The signs date to 1998 but the idea of getting rid of them began with a mid-September public inquiry to the Highway Department.

“I think it sort of warrants a broader discussion than just taking the signs down,” Shea said. Among other things, removing the signs could undermine town desires “to keep reasonable local traffic on these roads and also limit truck traffic. And if we take these down, we lose the opportunity for the [Putnam County] Sheriff’s Department to pursue certain avenues” of traffic control, he said. He said the Town Board would confer with the Old Road Society and other interested parties before acting.

Despite the town’s failure so far to get money from outside funding sources for oft-suffering Manitou Station Road, “we need to stand up and do the work,” Shea said. The board thus approved surveying and mapping work, to set things in motion. “We can’t make the residents wait any longer,” Shea explained.

During her report, District 1 Putnam County Legislator Barbara Scuccimarra described as “very successful” the meeting by the county legislators on the Butterfield redevelopment, where county offices are proposed as part of the complex.

“It was very important for the legislature to come over first-hand, drive the drive, see how far it is, and understand why we need services over on this side of the county and why we need Butterfield,” Scuccimarra said. Carmel, the county seat, approximately 20 miles from Cold Spring and even farther from Garrison and Continental Village. “I think they really got the idea,” Scuccimarra said. “So I am hopeful. Now we have to start the negotiation with the developer,” Paul Guillaro, “to find out exactly what it is going to cost and where we go from here — but it’s a positive direction.”

Scuccimarra and Shea also remarked on continuing public dissatisfaction over changes to the Garrison post office. “We’ve been getting the calls,” Shea said.

Scuccimarra said neighbors complained about bright lights, truck disturbances, incomplete fencing and parking lot projects, and other aspects of site enhancement. A drive past the post office on a recent night confirmed the presence of the unremitting lighting behind the building, she said. However, after talks with the USPS, “I am confident they will just keep going until they do [finish]” and resolve the problems, she added.

“It’d be great to get a schedule….” Shea proposed.

Leonard informed fellow board members of recent developments involving the historic cemeteries on Mountain Avenue and adjacent Cedar Street. Reporting that Haldane promises to repair the Mountain Avenue fence, near the school buildings, Leonard urged designation of clear boundaries for the twin graveyards. “We have to combine public use” of the streets “with respect for our cemeteries,” he said. “And we can do that, but we have to sometimes maintain buffers and barriers so we don’t intrude…”

The discussion occurred after the Cold Spring village government moved several boulders that had bordered the Cedar Street cemetery, increasing parking near Haldane. Late last week, at least one 19th-century base for a fallen headstone poked up from the cleared area, indicating a grave underneath.

Shea was quoted in the Putnam County News & Recorder as strongly criticizing the boulders’ relocation. Moving them “seemed rather disrespectful,” he reiterated Oct. 2. However, he added, in his full statement to the PCNR, not all of which appeared in print, he had also declared that “I’m sure it was done accidentally and inadvertently, as far as moving the stones.” He apologized to Cold Spring Mayor Falloon for the friction. “I should know after 13 years” in town government “to temper my remarks,” Shea said. At the village level, “they made a mistake,” he said. “I made a mistake…”