In the first of what they hope will be the beginning of a series of Jewish film night collaborations, the Philipstown Reform Synagogue (PRS) and Beacon Hebrew Alliance (BHA) are together hosting a showing of My So-Called Enemy.

The documentary was filmed several years ago, but is probably even more topical now. It follows the experiences and aftermath of a group of six Palestinian and Israeli teenage girls, part of a larger group of 22 who came to the U.S. in 2002 to participate in a leadership program called Building Bridges for Peace. The film not only looks at what transpired during the program, but continues to probe what happened to these girls — and how their viewpoints continued to evolve — for seven years afterwards, in the face of continued strife. 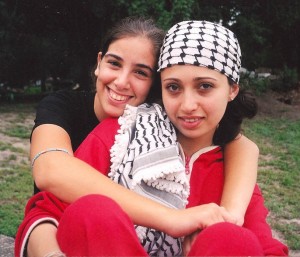 Two of the subjects of My So-Called Enemy

The screening, to which the public at large is very much invited, takes place at 4 p.m. on Sunday, Oct. 19, at Philipstown Depot Theatre in Garrison, and will be followed by a discussion, moderated by Rabbi Brent Spodek of BHA.

According to the film’s director and producer, Lisa Gossels, “In July 2002, 22 Palestinian and Israeli teenage girls came to the U.S. to participate in a women’s leadership program called Building Bridges for Peace. My So-Called Enemy is a coming-of-age story about six of the program participants and how they reconcile their transformative experience in the program with the realities of life back home in the Middle East over the next seven years.

What unfolds is an emotionally-charged film about the human consequences of all conflicts — as seen through the eyes of six young women who are thoughtful, intelligent and articulate beyond their years.”

The vital role of peacemaking

For Cold Spring’s Toby Shimin, who edited the film, “My greatest pleasure, in working with Lisa Gossels on My So-Called Enemy, was being able to explore the struggle that lies within the heart and soul of each of this film’s six extraordinary subjects. Coming to know these remarkable young women as they strive to find common ground with their ‘enemy,’ was as enlightening as it was inspirational.”

A winner of many accolades and jury prizes at film festivals across the country, My So-Called Enemy was described by the Washington Post as having “… compelling protagonists … Inspiring examples of reconciliation.”

A scene from My So-Called Enemy

PRS’s Diane Botnick, who has seen the film, calls it “not sappy — the woman who founded the organization in which they participate says ‘We are not here to change anyone’s mind.’ She urges them to talk and be respectful. Most of the girls on both sides are there because they at least think there is something equitable which can be worked out, but a couple are pretty committed to their own path. All of them are incredibly mature.

“The film follows some of the most dynamic girls after the camp, which is really interesting. Some of the Jewish girls join the Israeli army; two girls, one Palestinian, the other Jewish, become very close. Many have gone on to have amazing careers. It’s incredible to see that if you are a seeker, that stays with you.” Botnick says she is “really looking forward to having it seen — it’s really appropriate for teens and also for adults.”

Thematically, in a listing of discussion points on the film’s website, My So-Called Enemy is noted for featuring young women as change agents; providing a platform for multi-faith and multi-cultural understanding; offering a model for conflict prevention, resolution and transformation celebrating diversity and coexistence and addressing questions of identity as well as creating space for inclusive dialogue about the Israeli/Palestinian conflict.

Viewing, digesting and discussing the film is important to Rabbi Spodek. “Both personally and nationally, we suffer tremendously when we are locked into narratives that demand that we see someone as an enemy and only an enemy. It’s only by listening to and understanding narratives that are different than our own even — particularly — if we don’t agree with them, that peace is possible.”

The co-sponsored screening represents what is a continued, intentional effort between PRS and BHA to do more things together, according to Botnick. “We’re interested in sharing resources; we’ve just co-sponsored an event at the (Beacon Hebrew) synagogue and when there are opportunities we’ll continue to do them together.”