Work and prolific career have influenced generations of artists

Coming on the heels of the art center’s successful Steamroller Printmaking Festival, renowned New York artist and Bard College Art Department Chair Judy Pfaff is exhibiting three different series of prints and two enormous drawings that are related to her printmaking process. Pfaff’s exhibition at the Art Center is a stroke of great fortune for the community. Visitors from near and far Hudson Valley towns as well as from New York City will benefit from the chance to view her work in this intimate and beautiful setting. She will return to give a talk on Nov. 9, followed by a closing reception. 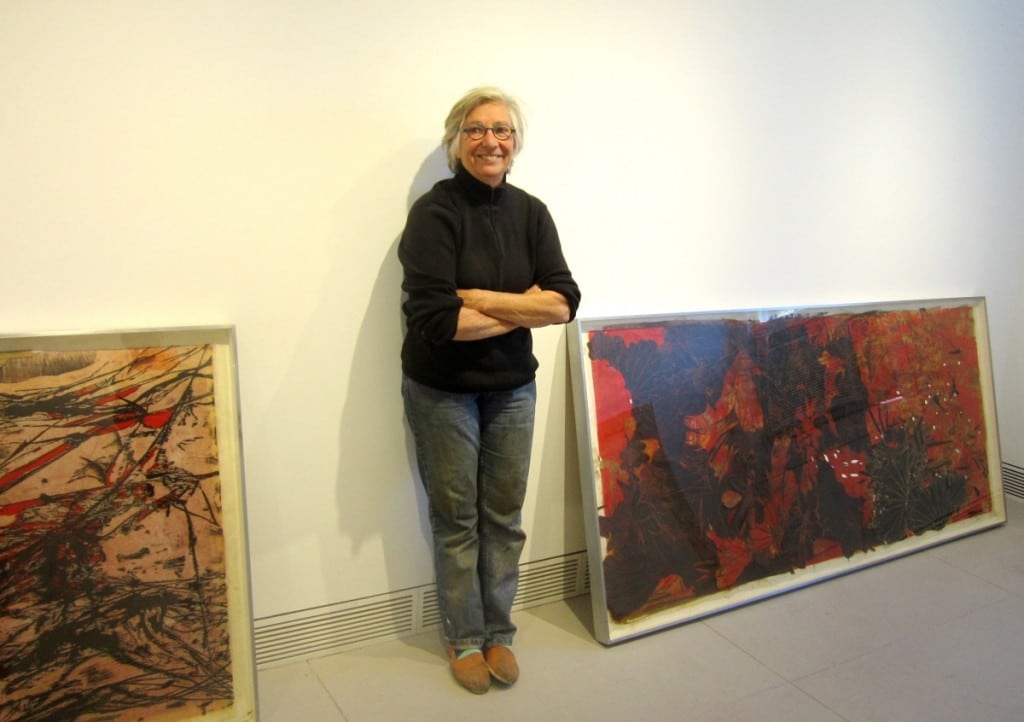 Judy Pfaff installing her work at the Garrison Art Center

The entry gallery includes a series of five editioned prints from 1992 titled Half Dozen of the Other and three photogravures from 2002. The print series consists of cascading geometric shapes, forms and line in motion. Printed in muted tones they have a fluid, science-like quality as if looking through a microscope or underwater.

The larger gallery includes 10 horizontal format woodblock monoprints from a series titled Year of the Dog from 2005 – 2008. These exuberant and magical works on paper are prints in name only. Pfaff begins her process using the humble woodblock as a basis and ground to work from. On top of this are layers of collaged, cut paper from the same print series.

These elements combine as forms, tears, lines and drips create a maelstrom of energy. The dynamic movement in these works encompasses every inch of space from edge to edge. Without any horizon line or point of reference they assume a close-up view, which can give a sensation of being inside the work.

Pfaff’s source material combines flowers such as lilies, magnolias, cherry blossoms and birds — strewn together across the picture frame as if they landed in the aftermath of a wind-tossed storm. The horizontal format references Chinese and Japanese scrolls and indicate a journey through time and seasons. The sweeping, lyrical gestures in these prints are expressionist and painterly. The three-dimensional cut paper elements give them a sculptural quality that goes beyond traditional printmaking. Judy Pfaff has never been an artist with limitations; she has always defied boundaries, both physical and artistic. 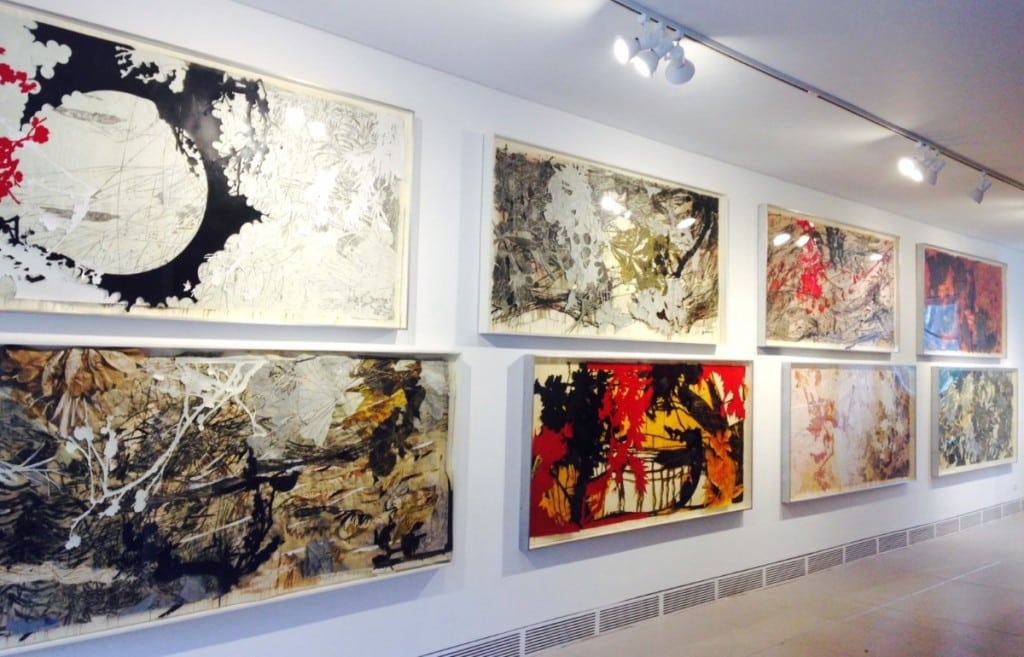 Also included in this gallery are two spectacular large works on paper that are related to the prints. They make use of Pfaff’s leftovers from the printmaking and cutting process — she calls them “the drops.” These drawings are not dissimilar from her installation work in their all-overness and ornate sculptural quality, as well as in the use of assorted found materials, paper flowers, musical scores, painted gestures and other printed visual detritus. These works are embracing, one can get lost in their swirling sea of color — but the artist’s keen sense of structure is there keeping them from dissolving into pure chaos.

I spoke with Pfaff as she installed the show (we first met at CalArts when she was teaching there in the late ‘70s.) She told me that she began working on this print series while living in Hawaii, which might account for the abundance of natural forms, though her work has always been about abundance. She also suffered the loss of her mother and several close friends including her mentor and former teacher Al Held during this time. 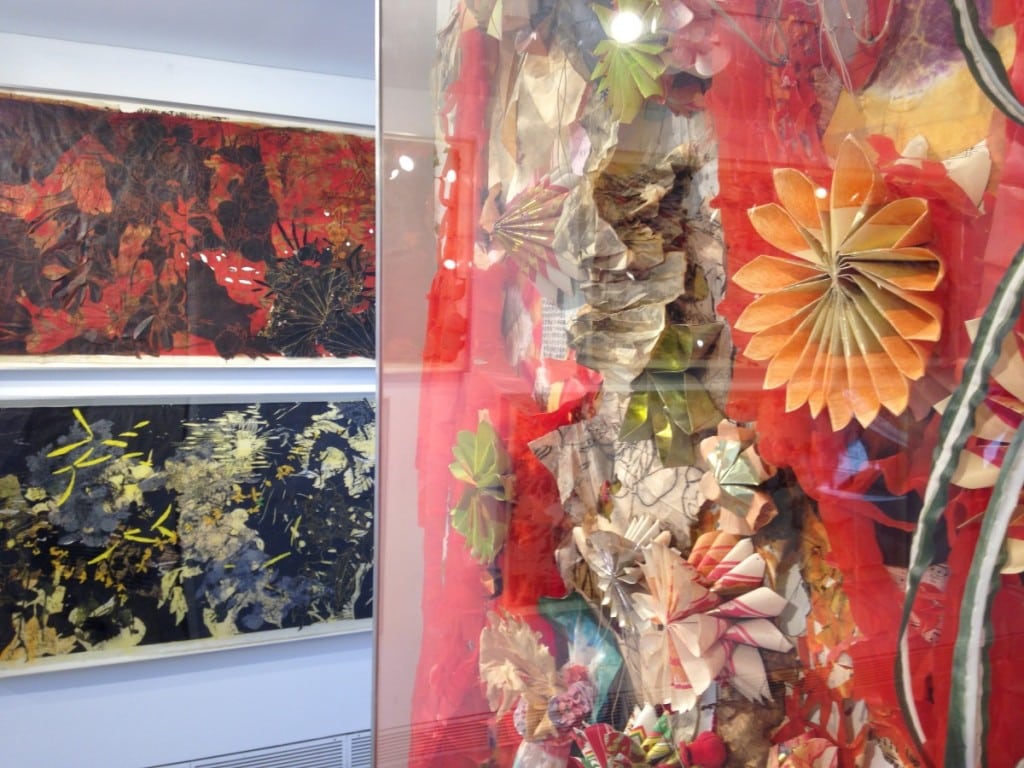 The print works reflect this period of sadness and loss in their amber, dark red and black tones. Somber yet exhilarating, they are a reminder of the fleeting quality of life. Pfaff’s plants burst into life only to die — fall comes in all its beauty but portends the stillness and quiet of winter. The timing is perfect for this show during peak leaf season in the Hudson Valley.

Judy Pfaff emerged in New York City in 1973, after receiving her MFA at Yale. Her early work may have been a reaction to the reductive and male-dominated Minimalist art movement. At a time when exhibiting women artists in New York were few and far between, she forged ahead and rose quickly. Her unique and inventive work, an improvisational form of large-scale room installation, has been going strong ever since.

Her installations are like collage drawings in space, sculptural, painterly and performance based all at the same time. Pfaff’s work has always been difficult to categorize, during the Post-Minimalist period she and many artists became interested in expression, using a wide variety of found and made materials contrasting the austerity of Minimalism’s focus on industrial materials. Her work is also related to the Pattern and Decoration artists who exhibited with her at Holly Solomon Gallery in New York City, the dealer who championed that movement in the ‘70s.

Pfaff’s work and prolific career have been a major influence on generations of younger artists. She is a generous artist with a seemingly unending source of energy and enthusiasm, a gift to the many students she’s taught over the years. She has exhibited internationally in museums and galleries including the Museum of Modern Art and The Whitney Museum and has had many private and public commissions.

In 2005 she was awarded a “genius” grant from the John D. and Catherine T. MacArthur Foundation. A statement from the foundation credits “her exploration of how to make painting more three-dimensional and sculpture more painterly.” Pfaff is also one of the featured artists in Art 21, the acclaimed documentary series produced by PBS. Concurrently with the Garrison Art Center exhibition she will be showing new work in Chelsea at Pavel Zoubok Gallery and Loretta Howard Gallery both on West 26th Street.