Half Moon Theatre embellishes dining out at new 800-seat venue

The Culinary Institute of America (CIA) faced a bit of a problem. With a campus holding about 3,000 students and faculty, the largest room on the grounds sat just 150. When a larger space was needed by the renowned institute — replete with graduations every three weeks, frequent “thought leadership conferences,” chef demonstrations, and other public and school-wide events — it had to be surrendered by athletic facilities — the running track and basketball court temporarily converted to different kinds of spaces.

All that changed with the opening of the 800-seat state-of-the-art Marriott Pavilion Ecolab Auditorium about six months ago. Now, a new partnership with Poughkeepsie’s Half Moon Theatre (HMT) is, in the words of the CIA’s Marketing Director Stephan Hengst, “a really exciting opportunity to bring people to the CIA and give them something new to do here … It will keep the space full and vibrant and bring the community in.” 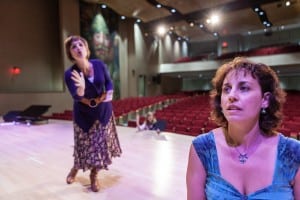 In its initial season at the new theater, HMT is producing three productions — a musical revue, a live radio play and a one-man show relating to the restaurant business. The CIA is offering theatergoers a special pre-show, three-course, prix fixe menu prior to select performances (most of them, save for Sunday matinees) for $39 per person, creating unique menus for specific performances. These meals will be served at several of the on-campus dining venues: The Bocuse Restaurant, American Bounty and Caterina de’ Medici.

All this is heady stuff for the eight-year-old Half Moon Theatre, whom Hengst calls “the obvious choice to collaborate with. They have local facilities, are engaged in the community and have a great reputation.”

For HMT’s Executive Director Molly Renfroe Katz, along with colleagues Kristy Grimes and Patty Wineapple, who began the theater company by renting space in the Cunneen-Hackett Arts Center, this new development is a bit of a “pinch me” moment.

“We’re so excited and honored to be invited to the party,” Katz said. HMT began in a grass roots fashion, founded by theater professionals newly relocated (from New York City) to the Hudson Valley, who “wanted a professional theater where we could work … From the start we were very ambitious, very exhausted and very happy, and we feel grateful that the community has welcomed us.”

The Cunneen-Hackett space, although fortuitous in some ways, was also “tough, because it was a historic space, and so we couldn’t alter anything, plus it was expensive. Relocating to a space in the Oakwood Commons office complex, off Route 9, HMT company members wound up transforming what was a raw space into a 70-seat black box theater, headquarters for not just the productions, and the company members who populate them, creatively, but HMT’s many other activities, which include extensive classes — from improv to playwriting and beyond for children, teens and adults, a play reading series, various performance and writing showcases, a 10-minute play festival and more.

In relocating to Oakwood Commons, HMT actually halved their audience capacity, and now this move takes them to 10 times their capacity, a huge adjustment, but one tempered by the nature of the new space, which Katz describes as “large and state of the art, but it feels intimate and very warm.” As HMT generally works with Actors’ Equity Association members, most have the experience of working in large theater settings. The transition has been made easier by a positive collaboration, with Katz calling the CIA staff “incredible to work with: accommodating and discerning, and so supportive of this venture.” 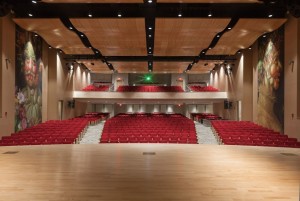 The six-month-old Marriott Pavilion theater at the Culinary Institute.

With so many seats to fill, the programming has been designed with audience accessibility in mind. “We’re focusing on things which are very audience accessible, while still things that have meat on them,” says Katz. Some, but not all productions will have culinary tie-ins. Geographically, the CIA is hoping that the enticing combination of theater and CIA-level food will draw from an extensive region, certainly including Philipstown and Beacon.

The creative talent of this area is being drawn upon as well, with Cold Spring’s Lisa Sabin a cast member of HVT’s first offering in the new theater. Sabin pronounces the new theater “… gorgeous. Plus, they told me that behind the upstage curtain there is a fully operational kitchen on wheels that can be rolled onto the stage at any time. Plus little trap doors on the stage where you can hook up to a natural gas line and — voila! — dinner cooked before your very eyes! Perhaps I’ll whip up a few gourmet snacks at intermission!”

With a scarcity of Equity contract work in this neck of the woods, Sabin feels especially happy to be performing under one. Additionally, she has reconnected, in coincidental ways, with a number of people from her theatrical past, whom she didn’t know were even in the area.

Though the transition to the new space is in some ways daunting, Katz says she and the rest of HMT are up to the challenge: “We have worked very hard, we love what we do and are really committed to it and we feel so lucky. We’ve found an extraordinary group of artists to work with and we’re excited to continue to use all the resources that are here in the Hudson Valley.

In a recent release, Katz noted: “We will be providing dynamic, accessible programming — suitable for all ages — which we hope will enrich campus life at the CIA as well as enhance a popular attraction for local residents and visitors to the Hudson Valley.” Returning the sentiments, Dr. Tim Ryan, the CIA’s president, stated: “We are excited to welcome Half Moon to the CIA’s campus … Now the community, our staff, and students can enjoy world-class dining and theater together, right in the Hudson Valley, in our spectacular new Marriott Pavilion.”

Cady Huffman in The Producers

Half Moon Theatre’s season at the CIA will kick-off with an Inaugural Benefit Gala on Oct. 25. The Gala features Tony Award-winning actress Cady Huffman, who will perform her show And She Can Cook Too! which debuted at Broadway cabaret hotspot 54 Below in New York City. Huffman is best known for originating the role of Ulla in The Producers opposite Matthew Broderick and Nathan Lane.

She was also a judge on Iron Chef America for 10 years. Huffman’s duel passions for food and theater make her the ideal guest performer to headline Half Moon Theatre’s new partnership with The Culinary Institute of America.

Half Moon Theatre will continue the season with the following productions:

Photos courtesy of the Culinary Institute of America