The local state park system grew by nine acres and hikers received a welcome amenity, a new trail and a parking lot at the trailhead, at a ceremony at Winter Hill on Snake Hill Road in Garrison, Thursday (Oct. 16). Winter Hill is the home of several nonprofit organizations including the Hudson Highlands Land Trust (HHLT).

HHLT Executive Director Andy Chmar presided over a brief ribbon cutting and official handover of land donated by philanthropist Chris Buck to the state of New York, which has jurisdiction over much of the local park land. Taking possession of the gift on behalf of the state amidst a light rain was Deputy Commissioner of the Office of Parks, Recreation and Historic Preservation, Carol Clark. 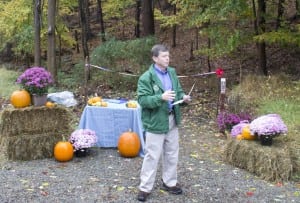 The 9.4-acre donation will double the size of this section of the Hudson Highlands State Park area. Chmar pointed out that up until now there was only a 10-acre section of the park in this area, originally purchased by the Open Space Institute and donated to the state. The new trail begins east of the entrance to Winter Hill and leads to the historic Northern Redoubt, which dates to the Revolutionary War era when soldiers from the Continental Army camped there. It also served as a key military position in defense of the river and West Point, which sits directly opposite on the western shore of the Hudson River.

Chmar credited Buck with first buying and renovating Winter Hill to house HHLT and other organizations, and his willingness to further expand the park and create, along with the Easter Foundation of the Osborn family, the parking lot “to create a safer and more pleasant public access to the historic trail.” The project included the work of the New York-New Jersey Trail Conference organization in the creation of the new trail to the redoubt. 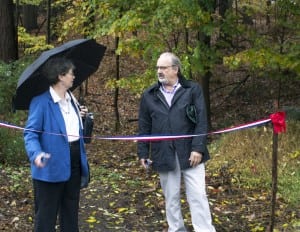 Buck first thanked his father for making the gift possible through his creation of The Peter and Carmen Lucia Buck Foundation and for “teaching me the love of nature which brought me to the Hudson Valley and got me involved in land conservation issues.” He also credited Chmar with “taking a great idea and making it happen. All great ideas in the Hudson valley land on his desk and he seems to know what to do and how to do it.”

Buck also thanked the assembled group of a couple dozen officials from governmental and nonprofit land preservation organizations who were holding a conference in the afternoon at Winter Hill to share ideas and update each other on projects.

Clark noted the expansion of the park and its historic significance as well as the public and private partnerships that have made the local park system grow. She also acknowledged the importance of the parking lot for hikers. “The lack of formal parking was really a problem,” she said.