Haldane trustees unlikely to accept it

It appears unlikely that the Haldane School Board will accept a recent offer to purchase the school district’s James Pond property. The $365,000 bid was discussed in executive session at the Oct. 7 meeting of the board. The property, a wooded, 10.6-acre tract of land adjacent to the east end of the Haldane campus, was appraised at $425,000 by McGrath & Associates more than two years ago.

In an email to The Paper on Oct. 15, Haldane School Board President Joe Curto said that he could not divulge details of the executive session discussions but that the offer “was not what we’re looking for.” He also said that he believes “we’ll receive more activity on the site from potential buyers,” stressing that 10 wooded acres of land within walking distance of the village and train station “does have value.” The property is listed by Houlihan Lawrence Real Estate. 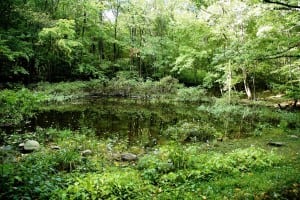 James Pond, in the woods near Haldane and Nelsonville

Sale of the property had been considered in the past but discussions got serious when the $2 million project to develop a new sports field at Haldane moved forward in 2012. At a meeting in June of that year, then Superintendent of Schools Mark Villanti referred to the sale of James Pond as “a key item,” in funding the long-awaited field upgrade and improvements to the school auditorium.

The proposed sale drew no opposition at a public hearing three months later and the initiative was approved in a referendum in November. Sale of the property was first advertised in December 2012. In his email, Curto said that at that time, “The board … was clear [in its] intent to have the land sale help offset the field and auditorium capital project,” ensuring that the initiative would be tax neutral. “That remains the case,” he said.

For many years, Haldane teachers and students have used James Pond as a site for environmental field studies. During discussions regarding disposal of the property two years ago, trustees emphasized that any sale agreement would include provisions to ensure that such educational uses would continue. Curto’s email also confirmed that has not changed.

In 2003, local taxpayers approved development of a sports field on the James Pond property but the project died when neighbors sued the school district. In the settlement that followed, the district’s ability to develop the land was greatly restricted, including a prohibition on any development within 100 feet of the pond. Curto said that the 2012 appraisal was based on development of a one-lot parcel.

5 thoughts on “Offer Made to Buy James Pond”