Ai-Ping Ma, Howland Public Library’s tech service manager, has some not-very-well-hidden talents. Each month, as she has done for the past seven years, she shares her cooking finesse with library patrons in Beacon, serving up a dessert to accompany the screening of a foreign film — the dessert always representative of the film’s origins. 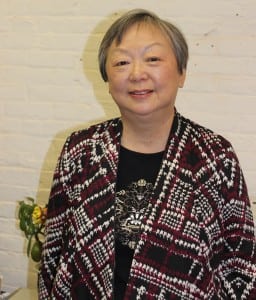 Ai-Ping Ma (photo by A. Rooney)

This month’s selection (the film screens at 7 p.m. on Oct. 24) is from Afghanistan, in the cinematic form of The Patience Stone. As described in library notes, the selection is an unusual war film: “We see the world through the eyes and forbidden thoughts of an attractive young Muslim wife as she faces the challenge of caring for a comatose husband and two young daughters on a war-ravaged side street in Kabul; and in the culinary form of Bride’s Fingers (Asaabia al-‘Aroos) confections made with phyllo dough, nuts, dates and honey.”

Since the inception of the series, film and food pairings have explored the familiar — France, Italy, Japan and the far less so: Denmark, Czech Republic, South Africa and Chile, to name but a few. This year’s selections have included films from Korea, Sweden, Iran, Ireland and Mexico. All are screened free of charge at 7 p.m. and tend to attract about 30 to 40 viewers.

When Ma first arrived at Howland Library, there was an annual film series, but these were then related to a theme, for instance there was a year of art-related screenings — everything from Crumb to Lust For Life, Frida to (the original) Moulin Rouge. A year of music followed, again jumping genres and centuries — Spinal Tap, The Glenn Miller Story, Hard Day’s Night, etc. With the rationale of “there are just a lot of good foreign films which you don’t get to see, not even on TV” mixed in with the highly positive response that Ma’s culinary efforts received from fellow staff members whenever she brought something in to share, she shifted the theme to international films and has stuck with it.

In choosing each monthly film, Ma is first and foremost bound by copyright — budget limitations restrict the library into signing a contract with one studio supplier each year.

“Just because the library can buy a film for circulation purposes, and a patron can take it home, doesn’t mean you can screen it, too,” Ma said. Luckily, even within these parameters, there is plenty to choose from, although lists lean heavily toward European cinema, with Asian, Latin American and further afield being harder to come by.

Researching extensively, usually from online sources, Ma finds films and then determines not only why people have liked them, but also why they didn’t. Patrons do request particular films and they sometimes travel from as far as Poughkeepsie to attend the international film evenings. “I try to keep it varied,” Ma says, “and above all I look for films with a positive outcome; I want people to go home feeling good about what they have seen.”

After the film has been selected, the dessert research (such a tough job) begins. Whatever is under consideration must stay fresh for a couple of days, and has to contain findable ingredients, though by now, Ma has a mainstay of a number of stores and suppliers in the region including a couple of Middle Eastern groceries and Indian food stores along Route 9. Ma has learned that several national cuisines share similar ingredients and spices.

Each recipe is tested a few times, with Ma’s husband often having veto or thumbs-up power. “He’s the first taster, then comes the staff — that’s a requirement of working here: you have to taste the dessert and give me an honest answer,” Ma laughs.

Every couple of years — including this one — Ma shifts culinary gears and offers a hands-on Chinese cooking workshop (she grew up in Taiwan). As participants get to sample results, the class fills up quickly, and advance registration for the Nov. 8 session, along with payment of a $10 fee, is required. (Sign up at the front desk for the 1 p.m. to 3 p.m. class.)

Although much of the prep takes place before class begins, all actual cooking will be done in class, despite the lack of sink and stove. The most important skills Ma hopes to impart are learning how to slice, chunk and dice, making strips, as well as instruction on how to marinate properly.

“Once you master these techniques,” she says, “you can use them in the preparation of any Chinese food.” The workshop is suitable for any level, from complete beginner on up. As an added bonus, containers are provided to participants to bring leftovers home.

Asked where she learned to cook, Ma replied: “Not at home. I never cooked — my mother always did. I had to learn later.” And when asked her preference on the best Chinese restaurant in the area, Ma was alas of no assistance: “I don’t go out to eat Chinese. I eat Italian.”

1 or 2 pieces Chinese sausage, cut half lengthwise, then cut to thin diagonal slices

Preheat oven to 375˚ F. Place the rice into an 8-inch square glass baking dish. Heat the water, oil and soy sauce to boil in a microwave oven. Pour it over the rice, stir to combine, and cover the dish tightly with aluminum foil. Bake on the middle rack of the oven for 1 hour.

One thought on “First Comes Film, Then Comes Food”