The Lives of Hamilton Fish, a cinematic rock opera by Rachel Mason, is inspired by a true Hudson Valley story. A serial killer and a statesman, both named Hamilton Fish, die on the same day: Hamilton Fish II, a descendant of one of the most prominent families in New York State and Hamilton “Albert” Fish, a psychopath and notorious child murderer. Their obituaries, both published on the front page of The Peekskill Evening Star on Jan. 16, 1936, prompt the paper’s editor to become obsessed with the coincidence.

The live musical performance and screening with the artist takes place from 5 p.m. to 7 p.m. on Oct. 26, and includes a reception and Q-and-A at the Hudson Valley Center for Contemporary Art in Peekskill. 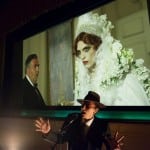 The film’s story is told through songs in the newspaper editor’s voice, played by Mason. The score is intended for performances with a live band. Mason will sing live with her film.

Mason is a sculptor, songwriter and performer. She is a graduate of UCLA and Yale University and has performed and exhibited her work extensively.

Tickets on sale at the door: $5 for HVCCA members, $7 non-members. HVCCA is located at 1701 Main St., Peekskill. Visit hvcca.org.