Fancy an anatomical model of practically any part of a body, a hula girl candy holder, a Tiny Tots Diaper Service glass jar, a taxidermy bear or a carnival stand for pitching dimes? Or would you pause to consider a mysterious key, a button in an unusual hue? Perhaps a familiar, evocative old toy conjures up your childhood. 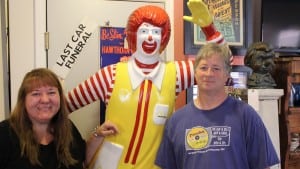 “Interesting things have always caught my eye,” said Phil Evans, one half of Galaxie 13’s owners. Owning can be a touchy word for Evans and his partner in curious objects, Ellen Smith. That’s because they covet things — the odder the better. Coveting led them to acquiring. And acquiring too much led them to overstuffed homes and the need to clear out and part with some of those things, so that they can enjoy more of the same — but different.

And that, in a nutshell (there’s every possibility they sell these, too) is the story behind Galaxie 13 in Beacon. “Galaxie 13 is what happens when two longtime collectors simply run out of room … you open a shop so you have an excuse to keep buying,” states their website. “We tend to focus on the unusual, the overlooked and out of the ordinary pieces … large or small; we enjoy items that are guaranteed to provoke wonder or start a conversation,” their website continues.

Evans described their wares as “smaller statement pieces — conversation pieces, oddities, anything unusual … Most come from the 1940s through ’60s, but we have had things much older than that as well.” Both fessed up that much of what they sell winds up in their apartment for six months or so before they part with it and send it on its way to the store.

Vintage, modern and beyond

Evans and Smith drive across the country in a large van once a year, calling in to auctions, antique malls, estate sales and pursuing leads from Craigslist notices and even flyers posted in gas stations, all in search of the uncategorizable, eye-catching objects that are now their stock in trade.

They travel with their contact list of customers seeking particular objects. If they find something they think a client might be interested in, they photograph it and, given the “I must have it” signal, purchase it on behalf of the collector. Some objects are large in scale — for example, there is a demand for old and repurposed furniture. Smith and Evans recently discovered a set of doors, from an old freight elevator, used to make a headboard.

“Many people are decorating lofts — we work with a lot of designers looking for pieces for customers,” Evans said. “When we look at things, we not only consider if it is cool; we think, ‘Who will want this and what can they make of it?’” Evans mentioned “an early 1900s prosthetic leg — of course half the people who saw it wanted to make it into a lamp.”

Evans grew up in California, the son of non-collectors. He has no idea what made his compulsion take root, but he’s had a yen for what he now sells for as long as he can remember. After running a similar establishment in California and taking a shine to the Hudson Valley while vacationing here a few times, he had an opportunity to move and took it. Both Evans and Smith are avid fans of their own merchandise first, business owners second.

“I love buying and collecting,” Evans said. “It gives me an excuse to have, cherish and then pass something along to someone else.” When she hears a customer say, “Oh my God, I’ve never seen that before,” Smith said, “That’s the best part. I especially like when something creeps somebody out and they love it!”

Curation for the curious

Their customers break down into about 60 percent those walking by and 40 percent “destination” shoppers, who have seen items they are interested in on the constantly-updated website and Facebook pages. Once customers enter the premises, located across the street and just a bit west of the Beacon Theatre, they find a well-stocked but easy-to-navigate small space filled with the arcane and the mundane, though generally off-kilter mundane.

Unlike some stores of its kind, there is no need to bring excavation equipment to unbury the treasures, and that is intentional, explained Smith. “A lot of people like the spread-out curating and don’t want to dig.”

When asked what the strangest thing they ever sold was, they did some mulling over — an albino skunk taxidermy was given consideration but discarded before Evans came up with something simple — “A human skull, antique and used for medical purposes.” Smith quickly interjected, “But also there were those jail doors from an 1880s prison … oh, and also the circus banner — it was huge, 8-feet-by-5-feet, from a sideshow. It went really quickly.” And then, in words not often heard from a storeowner, “Unfortunately.”

As for requests for objects, numbering among the more macabre are coffins from the 1800s (they have them), shock therapy paraphernalia, antique medical devices of all kinds, and a real electric chair — they have a fake one, but, “Who knows? We might stumble across a real one next week,” Evans considered with a glint in his eye.

Galaxie 13 attracts a surprising number of young people, including teenagers. Many are particularly interested in old cameras, spanning multiple eras, which fill one of the large glass cases. “They just love vintage cameras and also rotary phones. One of our best customers is 13 years old — he recently bought a fez,” Smith said.

The owners also offer appraisals. “People don’t know what to do with the stuff they have; we can steer them even if we can’t use it,” Evans said.

Galaxie 13 is located at 436 Main St., in Beacon, open Thursday through Monday. Hours are 11:30 a.m. to 5:30 p.m. on weekdays, until 6:30 on weekends, with extended hours on Second Saturday. Lisa Scheffer’s Creepy Doll Series of paintings (the first exhibition at the space) is currently on view at Galaxie 13. For more information, visit galaxie13.com.