Varsity cross-country traveled to the Harvest Classic at Schodack Island State Park in Rensselaer County on Saturday, Oct. 25. The girls went the distance for their second championship of the season, while the boys took third place and their first trophy of the year.

Ruby McEwen was the fastest Haldane runner, taking fourth place overall. Kate Phillips came in sixth, Taylor Farrell seventh, Abbey Stowell ninth and Wylie Thornquist 10th. Heather Winne, Sophia Carnabuci and Julia Olsen also finished strong. Coach Tom Locascio reflected: “It was great to see the girls run so well again this week. Ruby regained the No. 1 spot for Haldane, while Kate moved to No. 2 and last week’s winner, Taylor, dropped to third. These girls are so good that each week they could finish in any order. They each help each other to run the best they can. It is true teamwork.” 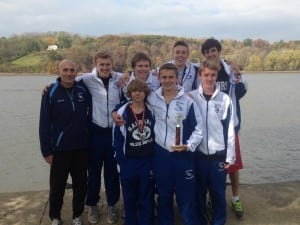 The boys finished behind Christian Brothers Academy and Gloversville, two much larger schools. Nick Farrell, who placed third overall, was first for the Blue Devils, followed by Brian Haines at 13th overall, Adam Silhavy next, then Andrew Gannon, Jake Howell, Eric Rizzi and Peter Duffy. These seven boys will represent the Blue Devils as they attempt their seventh consecutive Class D sectional championship at Bowdoin Park in Wappingers on Saturday, Nov. 1. The girls run at 10 a.m. and the boys at noon.

Varsity football will play in the Class C sectional championship against Tuckahoe on Saturday, Nov. 8, 3:30 p.m. at Mahopac High School.

Varsity volleyball will play Keio in the Class D sectional championship game against Keio on Saturday, Nov. 1 at 2 p.m. at Croton High School. There is an $8 admission fee for the game. 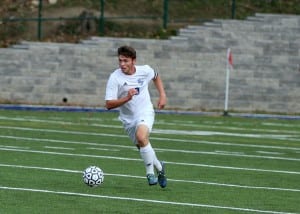 Senior Aidan Draper in a varsity boys soccer match vs. Hamilton on Oct. 28 at Haldane
(Photo by Scott Warren)